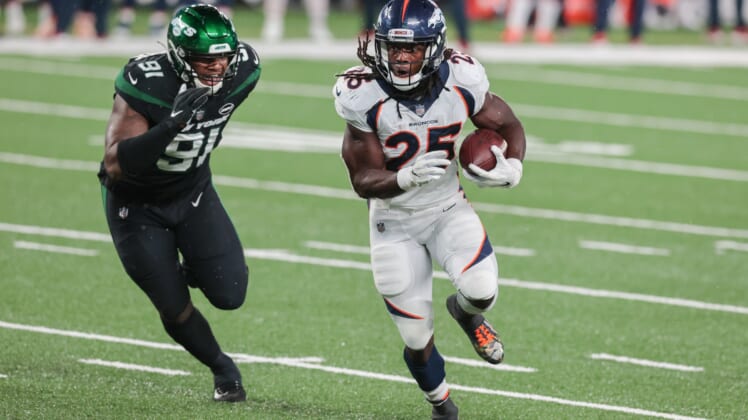 The NFL announced a slew of schedule changes for the remainder of the 2020 season on Sunday amid multiple COVID-19 outbreaks.

Originally slated to be played Sunday, the Denver Broncos’ Week 5 game against the New England Patriots has been pushed back to Week 6. This means that Denver is actually in the midst of its bye despite having practiced all week. While head coach Vic Fangio has given his players Sunday-Tuesday off, some are not happy about it.

It makes sense that players would be upset. They get one week off throughout a 17-week schedule. That time is supposed to be spent with family and loved ones. For the Broncos, this isn’t going to be the case. It also means that the one-win team will play 12 consecutive weeks. Given the team’s injury issues, this is not great news.

As noted, the league announced a ton of schedule changes on Sunday. Here’s the highlights.

As you can see, Gordon’s Broncos squad had to have three games rescheduled. Interestingly enough, his former Chargers team is impacted a whopping four times. Is this sustainable for the NFL? There’s certainly some questions about that.

We’re not too sure whether the Titans’ game against the Bills, originally slated for Sunday, will in fact be played Tuesday. Tennessee had yet another positive COVID-19 test in the latest results this weekend. The team has not played since Week 3.

The NFL schedule is going to be tricky to navigate moving forward should further COVID-19 outbreaks be the name of the game. On a related note, it’s expected that the virus will grow in numbers throughout the United States during the winter. The NFL obviously isn’t going to be immune from this.

NFL schedule to move forward in a bubble?

A recent reports suggests that the NFL is not looking to move to a bubble, much like what we saw during the NBA season and are currently seeing during the MLB Playoffs. However, there’s a chance that the NFL playoff schedule could be played in a bubble.

There’s growing concern over the NFL’s inaction on this front. That’s magnified by the league’s unwillingness to simply add a Week 18 to the 2020 schedule. This would solve a lot of issues.

As it is, NFL players are seemingly frustrated over what’s happening around the league amid the growing pandemic.