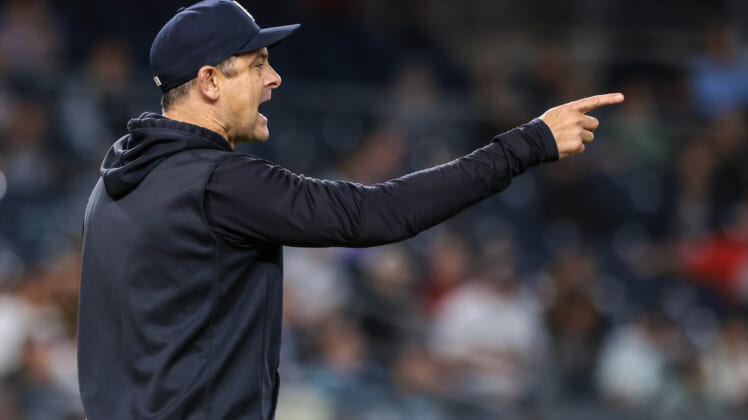 New York Yankees manager Aaron Boone entered the 2021 season on the hot seat after another disappointing postseason performance. After being eliminated in the AL Wild Card Game by the Boston Red Sox, Boone’s status has come into significant question.

New York hired Boone in 2018, choosing the ESPN analyst as the replacement following the departure of Joe Girardi. While he spent more than two decades playing in the majors, the Yankees’ gig would be his first time coaching in MLB.

The Yankees have enjoyed plenty of success during the regular season under Boone’s leadership. Across four seasons, New York boasts a 328-218 record and has made the MLB playoffs every year. But the Yankees haven’t reached the American League Championship Series since 2019.

Will the Yankees fire Aaron Boone?

After seeing their World Series hopes dashed once again, this time by Boston, Boone’s future in New York has become an open question. But it seems there is a chance he sticks around.

According to ESPN’s Buster Olney, owner Hal Steinbrenner is reportedly inclined to keep Boone as the club’s manager. Team officials are still waiting for a decision to be made and the situation is fluid, but the sense is that Boone will stay in New York.

“He likes [Boone], and I don’t think he blames him for what happened.”

Since 2019, the Yankees have ranked among the three highest-spending teams in MLB. According to Cot’s Baseball Contracts, they had the second-largest opening day payroll ($197.6 million).

If the Yankees retain Boone, changes to his coaching staff are certain. New York ranked 12th in wOBA (.317) and 13th in OPS+ (100). As a result, hitting coach Marcus Thames could be reassigned to another role or fired.

It’s possible Steinberg changes his mind and determines a fresh start is what the franchise needs. If that happens, Boone is a potential candidate to become the skipper for the San Diego Padres.