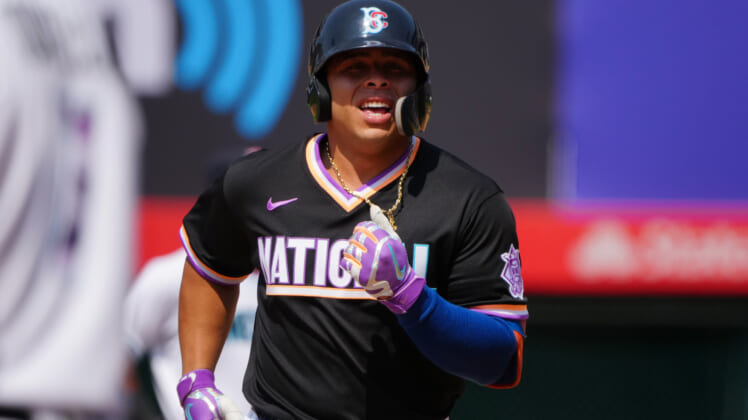 New York Mets’ top prospect Francisco Alvarez is one of the best players in the minor leagues and could be one of the best catchers in baseball within a few years. Despite a recent hot streak, he should not make his MLB debut anytime soon.

The 20-year-old catcher began the 2022 season with the Binghamton Rouble Ponies, New York’s Double-A affiliate. In his first game at the level, Alvarez flashed signs of future stardom with a home run in his Double-A debut.

For the 5-foot-10 catcher, it served as a spark to a hot start early in the season and fueled fans demanding the Mets called him up. With many wanting far better at catcher than James McCann and Tomas Nido, prospect hype led many to wish for Alvarez to join the lineup at Citi Field.

The anticipation and pleads for an MLB debut slowed down when Alvarez went cold in May. However, pleading to the Mets’ front office to call up its best prospect is back with the slugging backstop once again playing like an MVP in the minors.

However, despite the craving from the fan base, the best thing New York can do this season is to keep Alvarez in the minor leagues.

The jubilation Mets’ supporters have for Alvarez is understandable. There is a belief he can be the best catcher this organization has had since Mike Piazza. For a club with World Series aspirations, adding an elite talent would be another step towards ending a championship drought.

One of the best tests for young players in the minor leagues is how they react to struggling. Organizations and coaches get to see if the batter is mentally resilient and willing to put in the work required to adapt when pitchers seem to figure him out. That’s a box Alvarez checked already.

Related: Frankie Montas to the New York Mets, how it might work

Alvarez is steadily decreasing his strikeout rate, a promising sign for a young hitter. During his latest stretch, hitting 10 home runs in 19 games, he is making more contact than ever and it’s allowing him to barrel the baseball and tap into his natural power.

Of course, the Mets always felt very confident in Alvarez in the batter’s box. They wanted to see their catcher of the future prove he belongs behind the backstop, able to work with a pitching staff and really hold his own behind the plate. Fortunately, that’s another area where is making great strides.

Josh Hejka, a Mets’ relief pitcher in the minors told MMO Weekly that Alvarez is one of the favorite catchers he’s ever worked with, citing the confidence he has in the calls his battery mate makes. Furthermore, per Michael Mayer of MetsMinors.net, the 20-year-old catcher is receiving more rave reviews from pitchers.

Related: Luis Castillo to the New York Mets, how a trade might look

The Mets are receiving these same reports and more, inspiring them with greater confidence in Alvarez long term. It’s also why New York likely doesn’t want to risk a setback, which could come by rushing him to the majors.

Francisco Alvarez is much better than the competition he is facing at the Double-A level. There is no longer much to gain from him hanging around with inferior competition, it will only stagnate his development.

Realistically, Alvarez shouldn’t be with the Rumble Ponies much longer. The Triple-A Syracuse Mets return for a homestand at NBT Bank Stadium in New York on June 28, playing at home through July 3. It’s realistic to think New York will move up its top prospect to the Triple-A level around that time.

It represents another test for Alvarez. One reason it’s especially important, he would get the opportunity to work with plenty of pitchers who have MLB experience. It’s an important distinction as while the talent gap between Double-A and Triple-A is narrowing, the highest level in the minor leagues provides young players with the opportunity to be around those who know what it takes to compete in the majors.

This is precisely what Alvarez needs before making his MLB debut. He can work with a pitching staff that includes Trevor Cahill, Thomas Szapucki, Adonis Medina and Alex Claudio. When Jacob deGrom and Max Scherzer join the Mets’ rotation in July, New York can send down experienced starters to work closely with Alvarez in Syracuse.

Patience is crucial with prospects, especially catchers. There will come a time when New York will be trusting Alvarez to handle its rotation and bullpen, likely when he is in his early 20s. Playing for a team in a huge market with an organization that has championship expectations, that’s asking a lot from a young catcher.

We’ve seen several elite prospects – Spencer Torkelson, Adley Rutschman and Jarred Kelenic – struggle early after making their MLB debuts. The Mets know that will likely happen to Alvarez, but they only want him up when the timing is right.

While fans might have to wait until 2023, barring Alvarez destroying Triple-A competition and handling the pitching staff upon his promotion, it will all be worth it if he lives up to his potential as a perennial All-Star catcher and a force in the Mets lineup.