Heading into a hugely important 2022 season, New York Giants running back Saquon Barkley is out to quiet every single doubter because he claims he is “ready to go crazy, and I’m gonna let the world feel me.”

Whatever way you slice it, this is a make-or-break season in the career of the second overall pick in the 2018 NFL draft. After an amazing rookie year where he racked up over 2,000 total yards, 15 touchdowns, and earned Pro Bowl honors, the narrative on Barkley since has been about his health. He had injury woes in his sophomore year, missed most of his third season after tearing his ACL, and in 2021 seemed a step slow as he battled back from major knee surgery.

Related: New York Giants schedule: Getting it right against the Jets

However, the reviews on Barkley from Giants camp this summer have been overwhelmingly positive. Many have said that he seems to have his trademark explosiveness back and has maintained his health all summer. And he will need all of that if he wants to land a new long-term deal from the Giants or any NFL team once he hits free agency in 2023. Well, it seems that return to form has instilled a new level of confidence in the four-year veteran and he is feeling feisty just a couple of weeks away from the start of the season.

New York Giants Saquon Barkley: ‘People are trying to write me off’

On Wednesday, the 25-year-old sat down for a conversation with the New York Daily News 2ndWind Podcast. In the chat, Barkley revealed his motivations for the new season and how shutting up all the naysayers is at the top of the list. 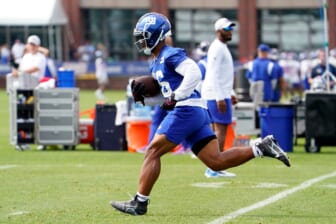 The Giants begin their regular season schedule on Sept. 11 with a 4:25 PM ET matchup in Tennessee against the Titans.