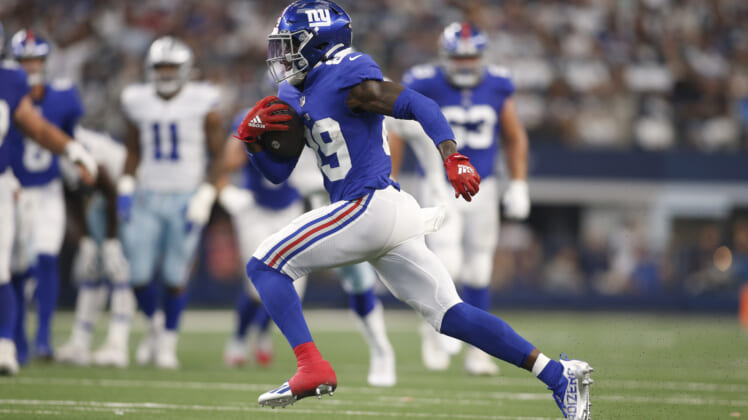 New York Giants rookie wide receiver Kadarius Toney enjoyed a breakout game on Sunday against the Dallas Cowboys, but all of that became an afterthought after he threw a punch at safety Damontae Kazee.

The rookie thrived as the go-to weapon in the Giants’ offense. he hauled in 10-of-13 targets for 189 receiving yards, torching single coverage and routinely finding open space to make plays. But when a scrum broke out in the fourth quarter, Toney threw a punch at Kazee.

He was immediately ejected from the game, but NFL Network’s Ian Rapoport tweeted Monday that a suspension is unlikely. Instead, the rookie will likely receive a heavy fine and the league will leave any further discipline up to the team.

While Toney escaped a one-game suspension from the NFL, there’s a chance he still isn’t allowed to play in Week 6 against the Los Angeles Rams.

Following Sunday’s loss to the Cowboys, Judge didn’t restrain his feelings about the punch and hinted a team-issued punishment was possible.

“Look, there’s a pretty distinct line in terms of competing and doing the things we’re not going to condone as a team that put us behind. That’s not going to be accepted. It’s not going to be condoned. That’s as far as I’m going to go with that. Obviously, it resulted in him leaving the game and I’m just going to leave it at that right now.”

The Giants can’t afford to be without another offensive playmaker. Saquon Barkley exited Sunday’s game with an ankle injury and early reports indicate the low-ankle sprain will sideline him for Week 6. As for Shepard and Slayton, neither practice this past week and their hamstring injuries could sideline them for a third consecutive game.

But Judge has built a reputation for being a disciplinarian in New York and could use Toney’s punch as an opportunity to send a message to the entire team. If that happens and New York is also without Golladay, the lesson could also mean an ugly performance against the Los Angeles Rams.