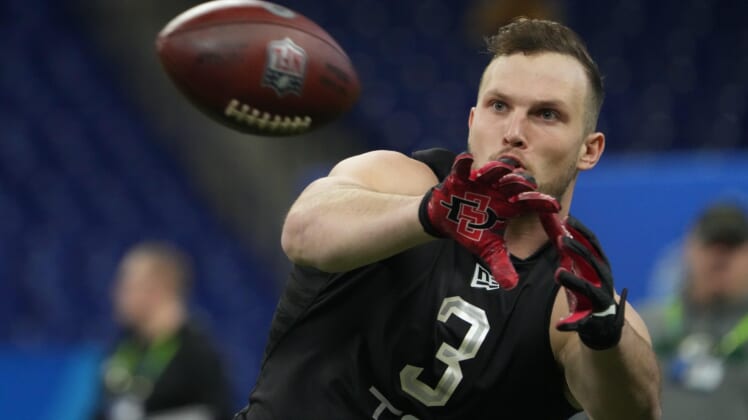 The New York Giants addressed two areas of need with their two 4th round picks in the draft as they took San Diego State tight end Daniel Bellinger (112th overall) and Iowa safety, Dane Belton, with the 114th pick.

In his four years at San Diego State, the 6’5 253-pound Bellinger caught 68 passes for 771 yards and five touchdowns.

He has good hands and ran an impressive 4.63 40-yard-dash at the NFL combine, which is one of the reasons people believe he will be more productive as a pro in Brian Daboll’s offense.

He will need to work on his route running, which New York will work with him at rookie mini-camp.

With Ricky Seals-Jones the only tight end on the roster with significant playing experience, expect Bellinger to make an immediate impact and could make a push to be the starter.

Dane Belton fills a need late in the draft

With the departure of Jabrill Peppers leaving via free agency and Logan Ryan being released earlier this offseason, the Giants were extremely thin at safety. This is why taking a versatile safety such as Belton made a ton of sense.

Belton came on strong in his junior year in 2021. He had 46 tackles, seven pass defended, and five interceptions, and was named First Team All-Big 10.

Although he’s listed as a safety, he’s a jack of all trades and can also play the slight and be used as a pass rusher. He’s the ideal player in defensive coordinator Wink Martindale’s defense.

Will have to wait and see how their careers play out, but it seems that general manager Joe Schoen got great value in taking Bellinger and Belton in the fourth round.