The New Orleans Pelicans might finally be in a situation where they can find star forward Zion Williamson more help. Coming off a disappointing 31-win season, New Orleans needs to do whatever is possible to appease Mt. Zion and his camp.

According to Zach Harper of The Athletic, that could include moving the 10th pick in the 2021 NBA Draft for a proven veteran player.

“The Pelicans already have so many young guys, and people around the NBA are expecting them to move this pick for some veteran help, according to league sources,” Harper noted. “How significant of a player the 10th pick in this draft would bring back is where the confusion hits for a lot of people prognosticating this stuff. David Griffin is always active with these trades.”

Working under the assumption that Griffin’s aggressive nature will continue leading up to the 2021 NBA Draft, we look at three ideal trade scenarios for the New Orleans Pelicans with the 10th pick in the annual event.

This one almost makes too much sense for both teams. By now, it’s already known that the Cleveland Cavaliers are looking to move off Sexton rather than hand him a rookie-level max contract extension this summer. What his market is right now remains an open question. What we do know is that Sexton is just 22 years old and averaged north of 24 points per game while shooting 48% a season ago. He’d likely slot in as the Pelicans’ starting two-guard next to youngster Kira Lewis Jr. Adding a defensive wizards in Nance Jr. would be icing on the cake.

From Cleveland’s perspective, the idea of adding a second top-10 pick to go with the third overall selection would be an absolute boon. Already set to acquire one of Evan Mobley, Jalen Green or Jalen Suggs with the third selection, this pick would help expedite a rebuild. Perhaps, someone like Baylor’s Davion Mitchell could be an option. Over the short term, Cleveland gets a stopgap option at point guard in Eric Bledsoe.

It ended up being a strategic mistake from David Griffin to acquire Adams in the multi-team trade that sent Jrue Holiday to the Milwaukee Bucks last offseason. Adams contract is an albatross, and he’s on the downswing in his career. Moving the veteran center would likely cost New Orleans assets moving forward. That’s where this potential trade comes into play.

Let us explain. Picking up a still-young 22-year-old center in Wendell Carter Jr. to team up with fellow former Dukie Zion Williamson makes a ton of sense. Carter Jr. averaged 11.2 points and 8.2 rebounds a season ago. This hypothetical trade also nets New Orleans a traditional wing in Ross who is averaging 15.1 points on 36% shooting from distance since the start of the 2018-19 campaign. 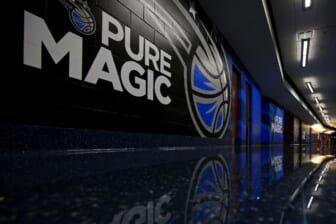 From Orlando’s perspective, this would be a no-brainer. It acquired Carter Jr. as one of the pieces in the Nikola Vucevic blockbuster with the Chicago Bulls back in March. Flipping him for a third top-10 pick in a loaded class while taking back Adams’ bloated contract would absolutely be a win, especially given new head coach Jamahl Mosley’s ability to develop young players.

If New Orleans is serious about finding immediate help for Williamson, Beasley could make some sense. Despite the guard’s legal issues, he’s expected to be back on the court for the start of the 2021-22 season. Beasley, 24, is also a scorer in the truest sense of the word. He’s averaging 19.9 points on 41% shooting from distance since joining Minnesota during the 2019-20 season. Teaming Beasley up with Williamson and Ingram would create a talented core three.

As for the Wolves, there’s a chance that they look to get back into the lottery after their first-round selection in 2021 went to the Golden State Warriors. Acquiring the 10th pick for Beasley would enable front office head Gersson Rosas to either add to Minnesota’s talented young core or flip said pick in a package for someone like Ben Simmons. At the very least, it gives the Timberwolves more flexibility.