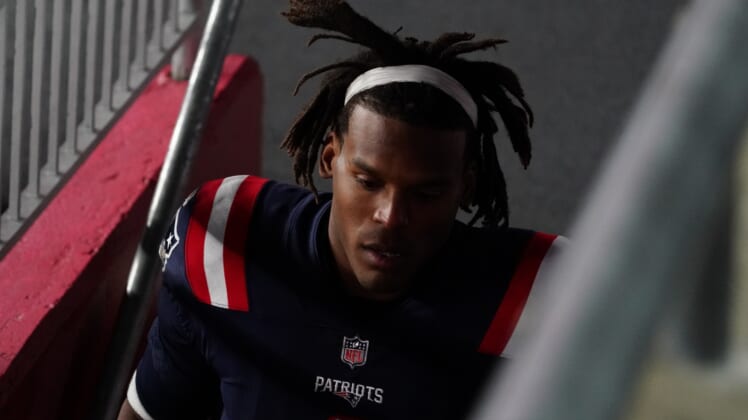 New England Patriots quarterback Cam Newton has been a shell of his former self since returning from COVID-19. That included Newton throwing three interceptions in a 33-6 Week 7 loss to the San Francisco 49ers prior to being benched.

All said, the former NFL MVP has tossed zero touchdowns compared to five interceptions in two games since returning from that virus-related absence.

With his Patriots in need of a win Week 8 against the division-rival Buffalo Bills, Newton sounded off big time.

“Losing is not acceptable in this locker room, in this county, in this state, in this area, in this region, so, Cameron Newton, you need to pick your (expletive) up,” Newton said, via the Providence Journal. “That’s what I learned.”

The Patriots sit at 2-4 on the season and are coming off their worst home loss of the Bill Belichick era. The backdrop here obviously being Tom Brady’s shocking departure from New England after spending the past two decades with the organization.

As for Cam Newton, he remains the Patriots’ starter despite recent injury issues and major struggles passing the ball. Remember, Newton did not sign a contract in free agency until late in the offseason. That came after he missed all but two games with the Carolina Panthers due to a Lisfranc injury.

“I understand that type of football play is unacceptable,” Cam Newton continued. “I’m all about putting the football team in the best position to win. That’s what I have to do here moving forward.”

Taking ownership is one thing. Improving your play on the field is another thing. After some initial success this season, Newton has bombed big time with the Patriots.

While Cam has added five touchdowns on the ground, that’s just not going to cut it.

As for the Patriots, they are 2-4 for the first time since all the way back in 2000. They are currently three games behind Buffalo in the win column in the AFC East.

Obviously, the Patriots need Newton to step up if they want to salvage the season.