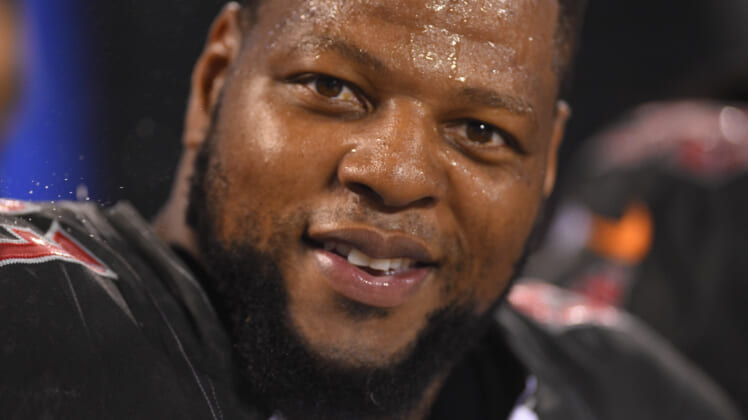 When the Tampa Bay Buccaneers signed Akiem Hicks earlier this month, the future of Ndamukong Suh seemed to be up in the air.

Currently a free agent, the five-time Pro Bowl defensive tackle had seemingly been hoping to return to the Bucs for a fourth season. Apparently, this is not going to happen.

Appearing on ESPN Monday afternoon, the former No. 2 pick said that “it looks like the Bucs are out of the picture.” Suh went on to add that he would like to continue playing.

Suh, 35, recorded 13 quartreback hits, seven tackles for loss and six sacks in 17 games (all starts) for the Buccaneers a season ago. There should be a market for his services.

Since his days with the Detroit Lions early last decade, Suh has proven he’s not scheme specific. This means he can play in both the 4-3 and 3-4 — leading to a ton of teams likely being interested in his services heading into training camp.

It stands to reason that Suh would want to join a contending team. Having existed in a 3-4 under new Buccaneers head coach Todd Bowles the past three seasons, moving on to a squad that runs the same style might be the easiest way for Suh to transition.

As active as any team this offseason, the Los Angeles Rams would make sense for Suh. The idea of pairing him up with multi-time NFL Defensive Player of the Year Aaron Donald would work out well. He’d be an upgrade over A’Shawn Robinson. Donald and Suh were also teammates with the Rams back in 2018.

Remaining in the NFC, we wouldn’t put it past the Green Bay Packers to show interest. They run a similar scheme as Tampa and could use a reinforcement in the front three.

Over in the AFC, contending teams such as the Indianapolis Colts, Baltimore Ravens and New England Patriots would also seem to be good fits.