The College World Series elimination game between North Carolina State and Vanderbilt scheduled for Saturday was ruled a no-contest due to COVID-19 protocol issues affecting the Wolfpack.

Vanderbilt advances to the College World Series finals, in which it will face the winner of Saturday’s Texas-Mississippi State game.

“This decision was made based on the recommendation of the championship medical team and the Douglas County Health Department,” read a statement from the NCAA Division I Baseball Committee. “The NCAA and the committee regret that NC State’s student-athletes and coaching staff will not be able to continue in the championship in which they earned the right to participate.” 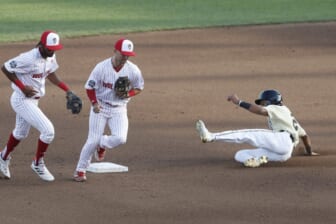 The start of Friday’s game between the Wolfpack and Commodores was delayed by about 70 minutes after several NC State players were placed in COVID-19 protocols. Only 13 players were available for the Wolfpack, and they lost 3-1.

“My job is to teach them baseball…I don’t try to indoctrinate my kids with my values and opinions,” NC State head coach Elliott Avent said after the game. “These are young men and can make their own decisions. That’s what they did.”

Avent refused to say whether any of his players tested positive for COVID-19.