Blake Griffin to reportedly be bought out by Detroit Pistons 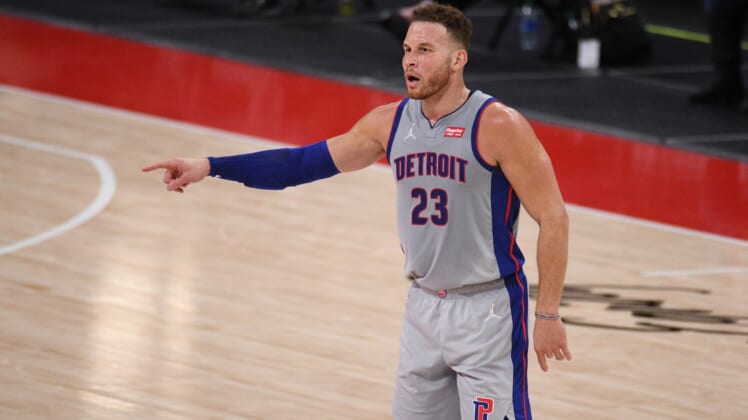 As the NBA trade deadline approaches, the Detroit Pistons have been busy shopping Blake Griffin around the league. Now, without any sign of a team willing to trade for the former All-Star forward, both sides could be headed for a mutual separation.

Griffin last played for the Pistons on Feb. 12, scoring 12 points and recording six assists in 35 minutes of action. Not long after the game, Detroit decided to rest the 31-year-old forward until it could find him a new home.

While there is expected to be plenty of activity before this year’s trade deadline, Griffin could become the first of many prominent players to hit free agency via the buyout market.

According to The Athletic’s James Edwards III, the Pistons will soon work towards a contract buyout with Blake Griffin. While it will take some time, given his albatross contract, both sides are ready to part ways.

Griffin started 20 games for Detroit this season, averaging 31.3 minutes per game. During his time on the court, he averaged 12.4 points, 5.2 rebounds and 3.9 assists per contest. The former No. 1 overall pick really struggled from the field, shooting 36.5%.

Injuries have taken a toll on Griffin, a six-time All-Star. Following an outstanding run with the Los Angeles Clippers, he was traded to the Pistons in January 2018 for Avery Bradley, Tobias Harris and future draft picks. Griffin’s first full season in Detroit went well, averaging 24.5 points and 7.5 rebounds per contest, earning a spot in the All-Star Game and receiving All-NBA Third Team honors.

Once he becomes a free agent, Griffin should immediately draw some interest from multiple contenders. Given needs around the league and reported interest as of late, the Miami Heat are likely the favorites to sign him.

As for the Pistons, they will still be active at the NBA trade deadline. While Jerami Grant isn’t being traded, Wayne Ellington will receive plenty of interest from contending teams and should net Detroit a draft pick.