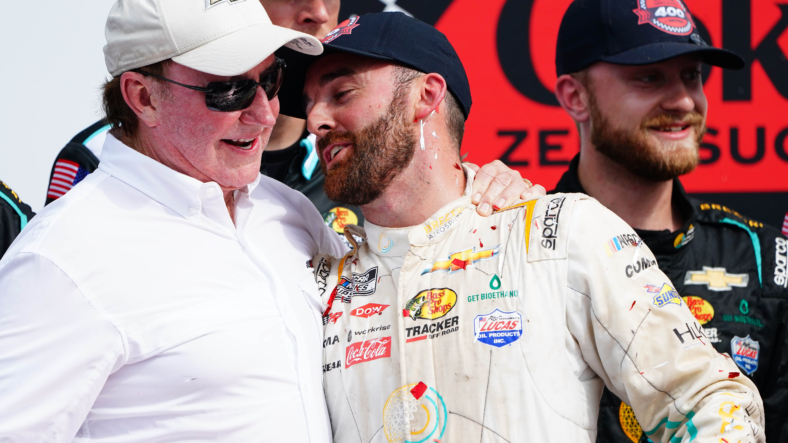 Richard Childress was a happy camper after the NASCAR Cup Series race at Daytona International Speedway when his grandson Austin Dillon was pushed to the victory by Tyler Reddick for a 1-2 finish by Richard Childress Racing.

However, while both of Childress’ cars are now locked into the playoffs, there was another topic brought up in his post-race press conference, which was Kyle Busch’s free agency process and their relationship.

There has been drama in the past between Richard Childress and Kyle Busch, which included a physical fight between the two parties after a NASCAR Truck Series race at Kansas Speedway during the 2011 season.

However, Childress had this to say after a question that asked for his comment about Richard Childress Racing being linked to Busch in 2023.

It is nice to see Childress and Busch put aside their differences after a very tense past between them. Childress praised the 37-year-old driver multiple times and said that he would land in a good ride somewhere.

It was then asked whether that good ride for Busch could be Richard Childress Racing and there was not a denial.

There should also be a note that Childress smiled when he gave out this response. There have been rumors about Busch possibly going to many organizations, such as Kaulig Racing and 23XI Racing.

But, it seems like Childress might be stirring the pot with his answers. The organization has both Tyler Reddick and Austin Dillon under contract for the 2023 NASCAR season and Childress has stated Reddick would return in 2023.

However, if not Richard Childress Racing, what’s the latest on Busch’s free agency?

Kyle Busch walked into the room for his press conference on Saturday afternoon and before he took any questions, he said to the media that there was an announcement to make. What was it?

“There is no announcement,” Busch said. It put everyone on the edge of their seats, but it was refreshing to see Busch in what appeared to be a good mood after weeks of answering questions about the 2023 NASCAR season.

The 37-year-old driver did not want to take any questions about the 2023 season and what could be beyond. However, as stated above, Busch was having fun with the media and even offered to come back later in a joking manner.

Busch was asked about whether he turned down a contract from Joe Gibbs Racing during the process and it was pretty much the only answer he gave out.

It’s understandable as Busch is still working through the details for the 2023 season. While there is no confirmation on whether the two sides have stopped talking, the longer this plays out, the chances could be getting worse.

The weekend went well for Busch after he won Stage 2 during the event and brought home a very wounded No. 18 car for a 10th-place finish. It is needed momentum for the No. 18 team as they enter the playoffs with uncertainty.

Busch will continue to work on a ride for next season but for now, the focus remains on the 2022 NASCAR playoffs in what could be his last one with Joe Gibbs Racing.