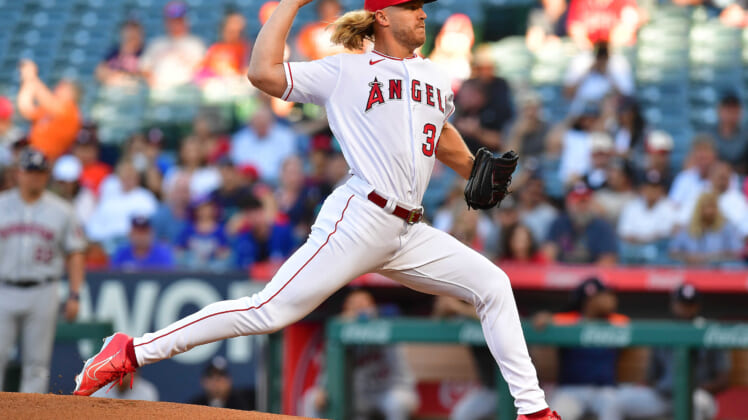 The Los Angeles Angels signed Noah Syndergaard to a one-year contract this winter hoping he would stabilize the rotation of an MLB postseason contender. Fast forward to July and the Angels are ready to move on from him as they sit near the bottom of the MLB standings.

Syndergaard signed the $21 million contract with Los Angeles this winter, intending to strengthen his value with a healthy season on the mound. While things haven’t gone according to plan for the Angels, their 29-year-old pitcher has found quality success thus far.

Rather than lose Syndergaard for nothing as one of the top MLB free agents in 2023, the front office has started exploring its options. While multiple teams are believed to have an interest in acquiring him, if the price is right, there are concerns around the league.

According to Jeff Passan of ESPN, front offices around MLB are “wary” of Syndergaard’s fluctuating velocity this offseason. The concerns are highlighted by his volatile results on a start-to-start basis, suggesting he might not be the reliable front-line starter he once was for the New York Mets.

Syndergaard experienced arm issues leading up to the 2020 MLB season, later being shutdown amid the COVID-19 pandemic. Soon after, the 2016 All-Star hurler underwent tests with an MRI determining he needed Tommy John surgery to repair the ulnar collateral ligament in his right elbow.

Unfortunately, concerns about his pitch speeds remain. Syndergaard is averaging just 94.1 mph on his fastball this season. Even more alarming, the velocity on his slider dipped far more dramatically.

Syndergaard’s ERA might still suggest he is a high-quality starter. However, his strikeout rate (18.9%) is down considerably from his healthy years when he regularly sat above 24%. Furthermore, his 8.1% Barrel rate is much worse than in 2019 (4.6%) and his Swinging Strike rate is under 11% (10.5%) for the first time in his career.

All of this highlights why MLB teams are rightfully concerned about Noah Syndergaard. Still owed just under $10 million for the remainder of the season and on an expiring deal, the Angels will be receiving a minimal return for one of their top starters.