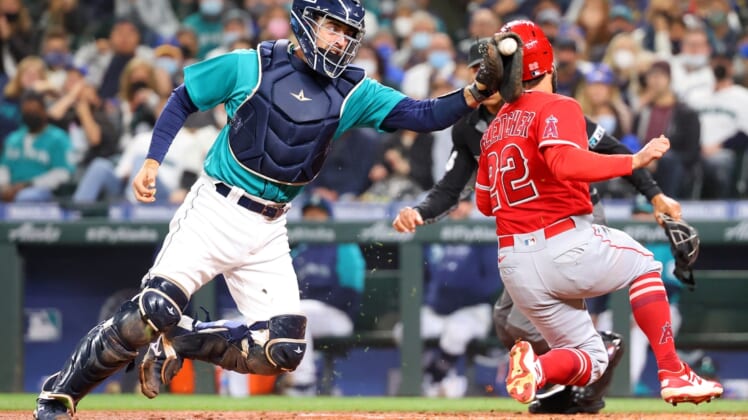 Luis Quijada came on in relief with runners at the corners and no outs in the seventh inning and struck out the next three hitters as the visiting Los Angeles Angels damaged the Seattle Mariners’ playoff hopes with a 2-1 victory Friday.

Brandon Marsh hit a two-run double in the third inning as the Angels won for just the fourth time in their past 14 games.

The Mariners, who had won four in a row and 10 of 11, dropped a game behind Boston in the race for the second AL wild-card berth. Seattle is tied with Toronto. The Mariners’ run came on Jarred Kelenic’s RBI double in the second inning.

Angels left-hander Jose Suarez (8-8) allowed just one run on three hits over five innings. He walked two and struck out five. Closer Raisel Iglesias allowed a leadoff double to Kyle Seager in the ninth but got a tapper back to the mound, an infield fly and a flyout to right to get out of the inning to earn his 34th save.

Trea Turner had a grand slam among his two home runs, Matt Beaty hit a go-ahead blast and Los Angeles remained alive to earn at least a tie for the National League West title by rallying for a victory over visiting Milwaukee.

Despite the win, the Dodgers still experienced a loss as veteran left-hander Clayton Kershaw left the game in the second inning with discomfort in his left forearm. The Dodgers, who already have qualified for the postseason as at least a wild-card team, remain two games behind San Francisco in the division with two games to play. The Giants’ magic number is one to deny the Dodgers a ninth consecutive NL West title.

Christian Yelich and Eduardo Escobar each had two hits and two runs for the Brewers, who are playoff-bound as the NL Central champs but have lost three of four. After entering with a career 1.89 ERA against the Dodgers, Milwaukee left-hander Eric Lauer gave up five runs on six hits over five innings. He walked two and struck out three.

Anthony DeSclafani combined with four relievers on a nine-hit shutout as host San Francisco won its seventh straight and clinched at least a tie for the National League West title by beating San Diego.

Staked to a 2-0 lead in the first inning, DeSclafani (13-7) breezed through five innings, allowing four hits and no walks. He struck out three. Jose Alvarez, Dominic Leone, Tyler Rogers and Doval (third save) wrapped up with four innings of scoreless relief.

Darin Ruf hit his 16th homer of the season, and the Padres got two hits apiece from Fernando Tatis Jr., Trent Grisham and Wil Myers. San Diego dropped its seventh straight and 12th in its last 13.

Hunter Renfroe snapped a scoreless tie with a three-run homer in the sixth inning and visiting Boston got a much-needed win over Washington.

Bobby Dalbec followed Renfroe’s blast with a solo home run as Boston won for just the second time in seven games. The Red Sox moved one game ahead of the Seattle Mariners in the race for the AL’s second wild-card berth. The Toronto Blue Jays are also a game back. The Red Sox also moved to within one game of the New York Yankees for the first wild card.

Rookie Wander Franco hit a two-run single in the ninth inning and Kevin Kiermaier hit a tiebreaking single in the second as visiting Tampa Bay recorded a victory over New York, which was unable to clinch a postseason spot.

The Yankees entered the game with a magic number of two to clinch their fifth straight postseason spot but their loss and Boston’s win over Washington left that number still at two.

Kiermaier’s hit helped the Rays move one win from their first 100-win season in team history. Nelson Cruz homered three batters in for the 449th of his career, tying the slugger with Hall of Famers Vladimir Guerrero Sr. and Jeff Bagwell for 40th on the all-time list.

Corey Dickerson added a solo home run and Cavan Biggio had three hits and an RBI for the Blue Jays in the opener of a three-game series. Pat Valaika hit a two-run home run and Kelvin Gutierrez hit a solo shot for the Orioles. Austin Hays added two hits and threw out a runner at home for Baltimore.

The Blue Jays remained one game behind Boston for the AL’s second wild-card berth, but gained ground on Seattle, which had been tied with Boston until it lost later Friday.

Dom Nunez hit a tying homer in the ninth inning and Trevor Story delivered the tiebreaking single later in the inning as Colorado recovered from a seven-run deficit to post a win over Arizona in Phoenix.

Sam Hilliard hit a three-run homer and Brendan Rodgers had three hits for the Rockies. Rookie pitcher Humberto Castellanos hit a three-run homer for his first major league blast for the Diamondbacks, who lost their fifth straight game. Arizona stands one setback shy of the franchise record for losses (111 in 2004).

Christian Walker added a two-run homer and Ketel Marte slugged a solo shot for the Diamondbacks.

Nimmo’s homers gave him eight this year and paced the team’s 11-hit attack. Pete Alonso had three of those hits. Megill’s only hit allowed was a single by Ozzie Albies with one out in the fourth. Edwin Diaz, the Mets’ fifth pitcher, worked a scoreless ninth and earned his 32nd save.

Bryce Harper went 3-for-5 with a home run and two RBIs and reliever-turned-starter Ranger Suarez (8-5) struck out a career-high nine batters as Philadelphia blanked host Miami.

Harper, a National League MVP candidate with 41 doubles, 35 homers and 84 RBIs, rolled his left ankle after smashing his double in the third inning but remained in the game and homered in the fifth inning. The Phillies snapped a four-game losing streak and clinched a winning season.

Marlins starter Sandy Alcantara (9-15) went five innings, allowing five hits, one walk and four runs, while striking out six. The 15 losses are a career worst for Alcantara, who finished the year with 205 2/3 innings pitched and 201 strikeouts.

Paul Goldschmidt delivered the game-winning hit in the bottom of the ninth as St. Louis edged visiting Chicago.

Trayce Thompson hit a three-run homer for the Cubs, who lost for the eighth time in their last 10 games.

Manaea (11-10) allowed two runs on seven hits and one walk with six strikeouts. Lou Trivino tossed 1 1/2 scoreless innings for his 22nd save.

Jason Castro hit a three-run homer for the Astros, whose lineup was without five regulars one night after clinching the AL West for a fourth time in five seasons.

Tucker also tripled and scored and made two stellar defensive plays. Pittsburgh starter Wil Crowe allowed one hit in six shutout innings. He struck out nine, walked two and retired the final 12 batters he faced. Chris Stratton (7-1) gave up a run in the eighth for the Pirates.

Jose Barrero had an RBI triple and Max Schrock an RBI single for the Reds. Starter Luis Castillo gave up one run and six hits in 5 1/3 innings, with three walks and five strikeouts. Amir Garrett (0-4) allowed two runs in one-third of an inning for the Reds.

Jose Ramirez drove in three runs to lift Cleveland to a victory in Arlington, Texas. Ramirez had a two-run single to cap the Indians’ four-run third inning before adding an RBI single as part of a five-run fourth.

Austin Hedges and Bobby Bradley each belted a solo homer and Harold Ramirez drove in two runs for Cleveland. Rookie Eli Morgan (5-7) tossed 5 2/3 innings and allowed four runs but got the win.

Every Royals player in the starting lineup had a hit except for major league home run leader Salvador Perez. Whit Merrifield led the team with three hits. Kansas City starter Jon Heasley (1-1) earned his first major league win in his third outing. He allowed four runs on six hits in 5 1/3 innings, with three of the runs coming in the sixth.

The Twins, the two-time reigning American League Central champion, were assured of a last-place finish with the loss. John Gant (5-11) allowed six runs on eight hits in four innings for the Twins. He walked two and struck out three.