Minnesota Timberwolves sign Kyle Anderson: One trade they should make next 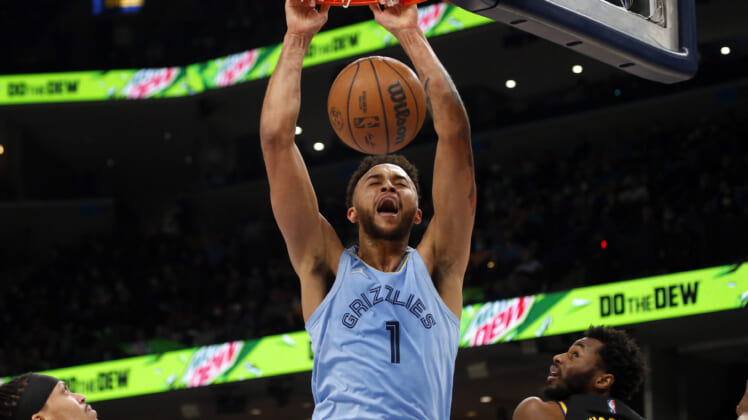 The first signing of the Tim Connelly era with the Minnesota Timberwolves includes stealing a player away from a fellow Western Conference playoff contender. Kyle Anderson, formerly of the Memphis Grizzlies has agreed to a two-year, $18 million deal, according to ESPN’s Adrian Wojnarowski.

For Anderson, he joins a young core looking to take the next step, like advancing past the first round of the playoffs. After all, it was his former Memphis Grizzlies that eliminated the Wolves in a six-game series this past season. But what does the one they call Slo-Mo add to the Timberwolves’ growing pack? And what moves should the T-Wolves have their eyes on next this offseason?

The Minnesota Timberwolves have a fairly well-rounded roster as is, with great offensive players mixed in with a few defenders who lack a strong offensive skill set. At 6-foot-9, Kyle Anderson is more of the latter.

If there’s one area where the Wolves still lacked proven depth, it’s at the forward position, which is where Anderson can provide steady play on both ends of the floor. He’s not someone who will wow you on offense, he’s shot just 33.4% on three-point shots in his career and averaged 7.6 points per game a season ago, but defensively, he’s wonderful.

Anderson averaged 5.3 rebounds per game, while stealing 1.1 passes per game, and even chipped in nearly a block per contest with 0.7 blocked shots per game. For the Wolves, they don’t need someone who will need the ball to be effective, they just need another reliable vet to play within their game, which is what Slo-Mo has always done. They call him Slo-Mo for playing his own speed, slowing defenders down while being effective, initiating offense and scoring in his own smooth, yet slow pace.

Anderson, with his 7-foot-3 wingspan, is likely to enter the rotation as the team’s backup power forward, behind Jarred Vanderbilt, but like Jaden McDaniels and Taurean Prince, he can play both forward spots just the same.

At the end of the day, Anderson adds length, defensive switchability, another player who can handle/distribute, all in the form of an experienced vet with 47 games of playoff experience.

It feels as if the Wolves are being careful about saving future cap space, by doing shorter deals, keeping the possibility of an all-in blockbuster trade taking place during the 2023 offseason. The Anderson signing takes $9 million off the cap next season, but one way the Wolves could theoretically get $6 million of this back, is by trading Malik Beasley, their three-point sniper.

Beasley has two years remaining on the four-year $60 million contract he signed with the Wolves. Only, the final year, in 2023-24 is actually set up as a team option, meaning if the Wolves, or the team that acquires him wishes to clear him off their books after next season, they can do so. But after ranking fifth in three-point makes last season, it’s hard to envision anyone not thinking he’s worth $16 million in 2023.

Then again, Beasley is a one-dimensional player who really only shoots threes, he doesn’t offer much else, which may be why he’s been a hard sell around the league. Not to mention, his past off-court history, leading to a 12-game suspension in 2021. Though to be fair, Beasley has been nothing but a consummate professional on the court, and few players seem more focused between the lines.

Either way, teams have to see some level of value in his elite shooting ability as a career 38.6% shooter from distance, averaging two makes per game. Here’s my proposed trade, but it actually hurts the Wolves from a future cap-savings perspective.

The Hawks just swung a blockbuster trade, landing them Dejounte Murray, who’s sure to help out defensively. Meanwhile, they lost a shooter in Danilo Gallinari. There’s also been talk of John Collins not being happy with his role, offensively. It’s not like Clint Capela takes many shots, he cleans up near the rim, but those additional opportunities could go to Collins, even if that’s not exactly the bigger role he had in mind.

Atlanta gets to clear future cap space, by offing Capela, giving them a lot more financial freedom going forward, and Naz Reid gives them another big capable of getting a bucket on the low block or out on the perimeter.

Beasley may not offer anything unique the Hawks don’t already have, but it’s early in the roster-shaping process of the offseason, there’s no guarantee Kevin Huerter or Bogdan Bogdanovic stick around either. One of them could always be packaged in a potential Collins trade too, if he gets moved.

Meanwhile the Wolves get to add their plug-and-play starting center next to Towns, shifting the world-class shooter to power forward. I know they just drafted Walker Kessler, a 7-foot-1 Loch Ness monster in the paint, but he’s not expected to fill a large role early on, and with Reid traded, he just became the top backup big on the roster.

Related: Minnesota Timberwolves interested in Clint Capela: How a trade could look

Many would argue a D’Angelo Russell trade should be Tim Connelly’s next move, but I’d prefer to run it back at this point. Russell’s trade value isn’t at an all-time high, and he’s good friends with KAT, meaning he’s unlikely to be a locker room cancer. Even if the team and DLo can’t find common ground on an extension this offseason, it’s possible they see his worth with a strong year in 2022.

If DLo’s traded, suddenly this team doesn’t have a future at point guard, even if he likes to say he’s just a ‘guard’ not necessarily a one or a two-guard. Basically, if they can’t get a surefire upgrade by trading DLo, they’re better off keeping his playmaking and ice-cold veins shooting ability in the lineup, even if that’s in a sixth-man role.

Related: 3 ideal D’Angelo Russell trade from the Minnesota Timberwolves with guard likely on the move