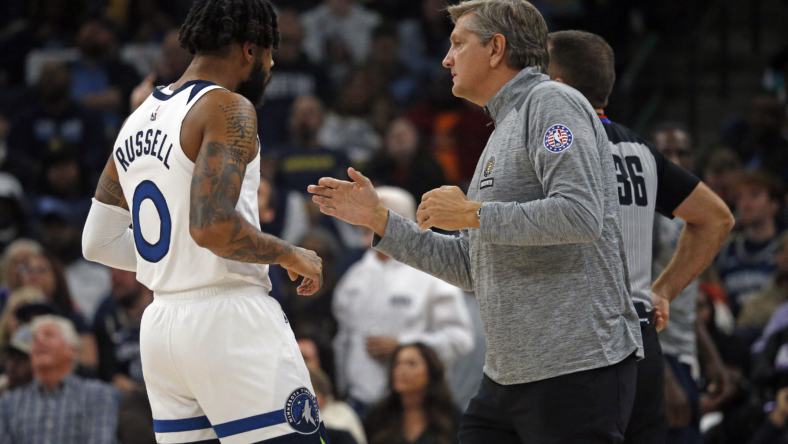 Just over two years ago, the Minnesota Timberwolves identified point guard D’Angelo Russell as their top free agent target. This desperate pursuit even included a helicopter ride to try and show DLo that no expense would be spared to improve the team as they aimed to get back to becoming a contender for the first time since Kevin Garnett was traded.

Unfortunately, that ride didn’t go well. While Russell was being shown the beautiful backdrop of California, news broke that he would ultimately sign with the Golden State Warriors instead. Yet, determined to land the scoring guard, then-general manager Gersson Rosas swung a blockbuster trade at the 2022 deadline, swapping Andrew Wiggins plus a future first-round pick (Jonathan Kuminga) for Russell.

While at the time, the Wolves were willing to pay the price to try something new with their roster, now that a new regime has taken over, first with coach Chris Finch, then with new president of basketball operations Tim Connelly, it appears they don’t like the leftovers.

Coach Finch has routinely spoken about how the team needs to share the ball more, defend better, and play with more effort. All three of these areas have shown up in Russell’s game. There was even a mind-numbing possession where Russell failed to realize he was substituted into the game, leading to a 4-on-5 scenario.

Even though this is Finch’s first time being an NBA head coach, it’s not his first rodeo. He loves to tweak lineups, and we’ve seen Russell get benched on numerous occasions, and it’s led to his playing time dwindling this season. Russell is averaging 29.7 minutes per game after averaging 32 across 65 games a season ago.

Yet, even if many observers feel subbing Jordan McLaughlin or Kyle Anderson in as the lead point guard may make more sense based on the early returns, we still haven’t seen a starting lineup change.

Russell’s already in the final year of his contract, but it’s come to a point where Russell’s days with the organization are extremely numbered. As in before the 2023 offseason.

Sure, trading the 26-year-old former All-Star would seem like the most obvious option, but it’s not that simple. At this point, Russell’s game isn’t leading any other NBA team to believe he can be the solution to their problems.

Russell has built his reputation on the back of being a scoring guard. He’s had two seasons in which he averaged over 20 points per game and has shown the ability to make pinpoint passes, setting his teammates up for easy buckets.

Only, we’re not seeing much evidence of his scoring prowess just yet in the early portion of this season. Russell’s shooting splits are at new career lows, and of course, his scoring average is down as well.

Despite being the second overall pick in 2015, Russell has looked far from a former lottery selection with the Wolves. He may still be 26, and he has flashed otherworldly talent, but the problem is the man with “ice in his veins” has more commonly been ice cold on game day as of late.

Minnesota Timberwolves may be stuck with DLo

Even if he’ll never admit it publically, coach Finch may be at his wit’s end when it comes to finding the best way to make Russell work in the starting lineup.

He hasn’t hesitated to play his backup guards more and more, whether it’s McLaughlin or Kyle ‘SloMo’ Anderson, but everyone knows Russell is the one with the most talent. He has the ability to play better, we just haven’t seen it consistently enough this season.

If the Wolves continue to slip down the standings (they can’t go much lower), don’t be shocked to see coach Finch move Russell to the bench as he tries to find a lineup that works. Trading him and getting fair value in return likely isn’t an option.

Attaching draft picks, well, that concept went out the window with the Rudy Gobert trade, leaving the Wolves without a tradeable first-round selection. For other teams around the league, adding Russell and his 2022 salary, even if it’s expiring, just won’t be appealing. In the end, the Wolves may be stuck with Russell.

Related: Why the Minnesota Timberwolves have been a massive disappointment in 2022