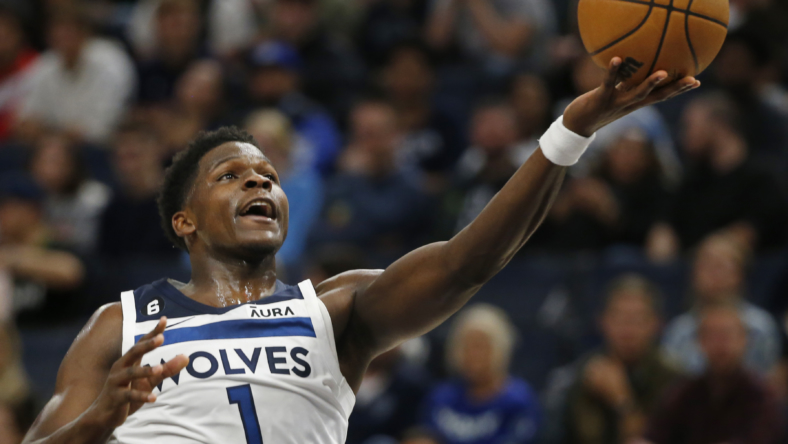 After finishing seventh in the Western Conference, losing in the first round of the playoffs, the Minnesota Timberwolves made a massive addition to their pack by trading for Rudy Gobert. This was the move that was supposed to help take a young core, led by Anthony Edwards over the top, making them a legitimate championship contender.

Yet, through the small sample size of 11 games, we haven’t seen any evidence of a team that’s even better than last season’s roster. While Gobert has missed the past two games with an illness, the Timberwolves have displayed several lackluster efforts on both ends of the floor early on.

Those struggles were on full display on Monday night at home against the Tom Thibodeau-coached New York Knicks. Allowing the Knickerbockers to sink 19 threes on 39.6% while also getting outhustled and outworked on the glass led to the visiting team taking an early double-digit lead in the first quarter that they would never relinquish. The Knicks even led by 27 at one point.

But getting outworked has become a common theme for the T-Wolves this season, where we’ve frequently seen teams run the pack off the floor. Whether it’s not getting back on defense, not boxing out, or just simply playing hero ball, the current chemistry on the Wolves has mostly been nonexistent.

Perhaps moreso, the Timberpups have just lacked grit. According to Edwards himself, the Wolves have been “soft.” And it’s hard to disagree. Here’s what the budding star had to say following Minnesota’s latest loss.

“I feel like we try to bring energy. We just play soft, man. Like, every bump, we flying all over the place, including myself. Teams just coming in like, ‘We’re going to take their heart,’ and that’s what’s going on. We’re down 20 every game.”

Playing soft has been a criticism we’ve heard before. Whether it’s this season or in past years, we’ve seen the team essentially fold when the going gets tough. While they may provide glimpses of hope, such as making a futile comeback that was too little, too late against the Knicks, the core root of the issue is how they allow teams to build such a large lead, to begin with.

Minnesota Timberwolves have lost their heart and hustle

What’s so different about this year’s Timberwolves compared to last season’s crew? Three of the five starters are the same, and it’s not like age has become a factor for anyone on the roster.

Obviously, the biggest change has been adding Gobert to the lineup, but he wasn’t on the floor against the Knicks. Can we really blame him for their latest disappointing showing? Of course not.

What has changed is the Timberwolves have lost their heart and hustle. The players who come onto the floor, knowing their job is to do the dirty work. Trading Patrick Beverley and Jarred Vanderbilt, who were arguably the team’s two best defenders (Vando being the team’s best rebounder), has taken a toll.

There was some belief that Jaden McDaniels could step into a bigger role, and he does routinely take on the team’s best scorer, but he’s far too timid and laid-back to bring the intensity on a nightly basis. Early foul trouble also hasn’t helped. McDaniels is averaging 3.5 fouls per game and has already fouled out twice in 11 matchups.

Somehow, some way, the Wolves need to find a way to crank up the volume without staying in foul trouble. It’s going to take a team effort from all five starters committing to crashing the glass while also being aware enough to sprint back down to the other end of the floor to prevent fastbreaks. While Bev and Vando are gone, other hustlers such as Taurean Prince, Jordan McLaughlin, and Naz Reid remain. But it shouldn’t come down to the bench to save the day; this begins and ends with the starting five.

Anthony Edwards must pick up the slack

While Edwards can publicly call out his teammates all he wants, and this roster seems to take no issue with such very visual criticism, they need to keep it in-house and put it on themselves to improve before calling out others.

Edwards doesn’t escape the blame. Expected to continue growing his game going into his third season, while we’ve seen his rebounding rate improve, Edwards is still showing the same lack of awareness on the defensive end, where mental lapses frequently lead to easy buckets.

It’s not for a lack of effort, as Edwards has inconsistently shown the ability to hustle on both ends of the floor, but his inexperience and lack of an ability to lock in defensively is showing up on the tape. Ultimately, if Edwards expects his teammates to start going 110%, then he needs to lead the charge. If he believes he’s ready to become the team leader, he needs to start showing it on a nightly basis.

There’s no doubt that when Edwards is at his best on both ends of the court, the team thrives. So he can’t expect the role-players to lead the way if he himself is struggling to keep up and struggling to share the ball when it’s not his night.

Credit to Ant for realizing he’s part of the problem, but now it’s time to show why he can be part of the solution too. Easily the most talented player on the team, Edwards must be a better version of himself to start leading the pack back to victory. It’s a long season, with 71 games still to play, meaning there’s plenty of time to put a better effort in. It’s the one factor each individual player can actually control every time they take the court.