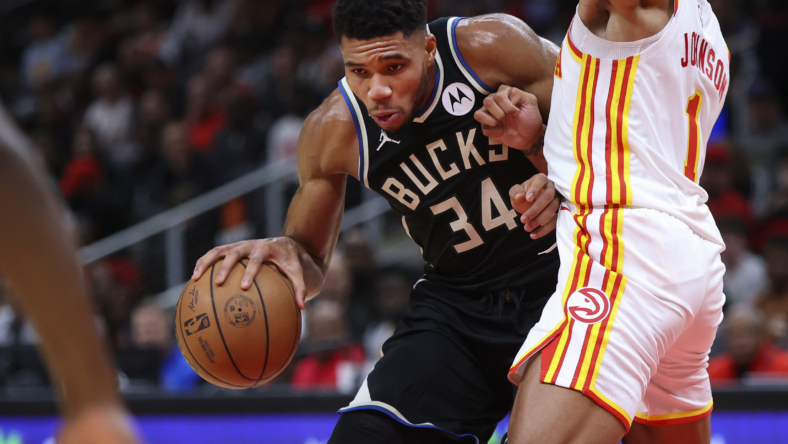 As far as dominance goes, Milwaukee Bucks superstar Giannis Antetokounmpo undoubtedly tops most of his peers in the league. His physical attributes are undeniable, but keen eyes find it easy to see the holes in his game.

Antetokounmpo took off in the 2016-17 season. He’s never looked back since and has put up All-Star-level numbers both offensively and defensively. In his last six seasons as the Bucks’ cornerstone, Antetokounmpo averaged 27.5 points, 11.2 rebounds, 5.5 assists, and 1.4 blocks per game. However, that doesn’t change the fact that even the most productive player in the league also has a lot of room for improvement.

The so-called casual fans may have overlooked these, but Antetokounmpo has a couple of things he needs to polish in his craft. Let’s take a quick look at what he could improve.

Antetokounmpo’s physique is incredible. Without a doubt, the Bucks coaching staff has been able to utilize it to the team’s advantage. Sadly, they can only do so much in terms of honing the two-time MVP’s basketball IQ.

Gilbert Arenas once said it, Antetokounmpo is a tremendous athlete, but at this point, he’s relying heavily on brute physical abilities. Arenas’ take on Antetokounmpo might be subjective, but believe it or not, he made quite a good point.

As it stands, Antetokounmpo is already playing his 10th season with the Bucks. To this day, he hasn’t ingrained his genius in the team, perhaps, because he doesn’t have any. It’s quite easy to see as Milwaukee has been winning, not because Antetokounmpo knows the Xs and Os. Instead, it’s mostly because of his ability to abuse his defenders. Given Antetokounmpo’s size advantage and the lack of lockdown defenders in today’s game, it’s not surprising at all.

Along with Antetokounmpo’s progress, skill-wise, came confidence. While it’s only fitting that the Bucks give Antetokounmpo the perk of taking more shots than anybody else on the team, they should also be mindful of the results.

In his maiden All-Star season in the NBA in 2016-17, Antetokounmpo shot 180 three-point attempts, a significantly higher number compared to his 109 the previous season. As expected, the outcome wasn’t pleasing, as he only nailed 49 out of 180.

Despite the underwhelming results, Antetokounmpo remained unfazed by his three-point efficiency. Since 2018, he’s never shot fewer than 200 three-point attempts and never even made half of them. To date, Antetokounmpo is averaging 28.8% from beyond the arc, and it should be enough for Milwaukee to make him stop pulling up from deep.

As a wing player, Antetokounmpo is not expected to dribble a lot. For some reason, he seems fond of doing so. Unfortunately, he doesn’t have handles.

Antetokounmpo is already dropping 25 to 30 points on a regular basis off of cuts, pick-and-roll, and transition plays. However, it has become more and more apparent that he likes to score off a crossover as well. He hasn’t found much success from it, and it’s probably better to forget about that move and stick to what he does best.

Indeed, Antetokounmpo will go down in history as one of the greatest players of all time, but with the way he’s been playing at present, people should not be too quick to put him up against some of the all-time greats.