Miles Bridges chase is reportedly a 3 team race between Hornets, Pacers, and Grizzlies

The hunt for restricted free agent Miles Bridges is heating up ahead of the June 30 start of NBA free agency, and it seems three teams are strong contenders to land the four-year veteran.

Unsurprisingly, Bridges had his best season as a professional just in time to test his value with interested teams around the league this summer. In 2021-2022, the 24-year-old led the Charlotte Hornets in points and minutes. He also finished second in rebounds, behind center Mason Plumlee, and third in assists. Suffice to say he was their best player last season and increased his free-agent value exponentially.

Heading into the summer, the 12th overall pick in the 2018 draft seemed like a nice fit for the Detroit Pistons. A team that had a boatload of available cap space. However, after making a trade with the New York Knicks on Tuesday that landed them notable bench players Nerlens Noel and Alec Burks, it now seems like they won’t have enough cap space to land Bridges and pair him with young star Cade Cunningham.

Pacers, Grizzlies, and Hornets are top contenders for Miles Bridges in free agency

On Wednesday, Bleacher Report NBA Insider Jake Fischer reported that the Indiana Pacers could actually be in play for the forward. “The Pacers have mulled over making Bridges an offer, sources told B/R, but it’s unclear whether Indiana will actually be willing to add such an expensive piece into their rebuild,” Fischer wrote.

The Pacers have never really been a team to shell out big bucks for top free agents in any given offseason. And with the Charlotte Hornets having the chance to match any offer, an interested team would likely need to offer Bridges at least a deal worth more than $25 million annually.

Darkhorse contender the Memphis Grizzles can’t sign Bridges outright, but Fischer claims there have been rumblings they could pursue him nonetheless. “League executives have long painted Memphis as a sleeper candidate to make a bid for Bridges, where he could join his Spartans teammate Jaren Jackson Jr. However, that rumored Grizzlies interest has been repeatedly shot down by league figures with knowledge of the situation.” 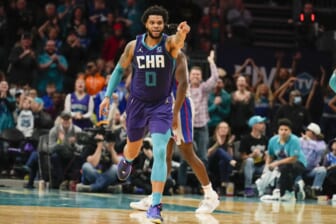 Lastly, there are the Hornets. The team Bridges has played his entire career for. Fischer reports the team has long made it clear they plan to match any offer made by rival teams. And as the recent employer of Miles Bridges, the NBA CBA allows them to offer the most money annually — $30 million — and an extra year.

However, since Jalen Brunson is likely to take less money and years by choosing the New York Knicks over the Dallas Mavericks, it can’t be ruled out that Bridges could do the same to play elsewhere.