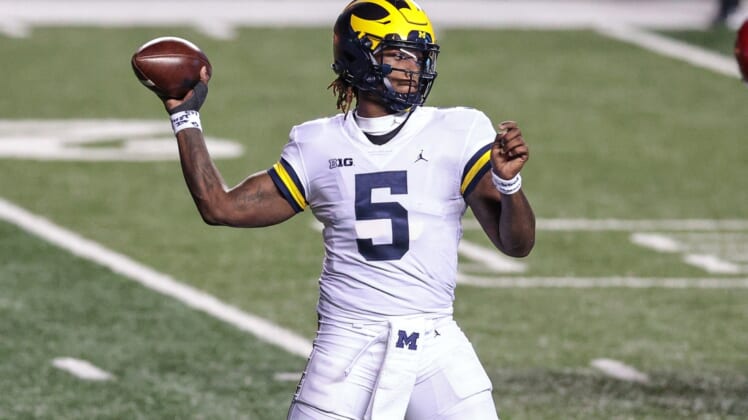 Michigan quarterback Joe Milton has entered the transfer portal as a graduate and will have three years of eligibility remaining.

The third-year player took to Twitter to announce his decision.

“I want to thank Coach [Jim] Harbaugh for giving me that opportunity to come play for a program with lots of tradition,” Milton posted, in part.

Milton was named the starter for the 2020 season before being replaced by Cade McNamara for the final two games of the season. Milton completed 56.7 percent of his passes for 1,077 yards with four touchdowns and four interceptions.

As a grad transfer, Milton will be able to play immediately. Milton had not used his redshirt season yet and the NCAA granted an extra year, giving Milton three.

Milton is the second quarterback to transfer from the program since last fall. Dylan McCaffrey opted out of the 2020 season and since transferred to Northern Colorado, where he’ll play for his father, former NFL receiver Ed McCaffrey.

The Wolverines have three scholarship quarterbacks: McNamara, redshirt freshman Dan Villari and incoming freshman J.J. McCarthy. An Illinois native, McCarthy was a five-star prospect in the Class of 2021, ranked as the No. 2 pro-style quarterback and the No. 24 overall player in the nation by the 247Sports composite.