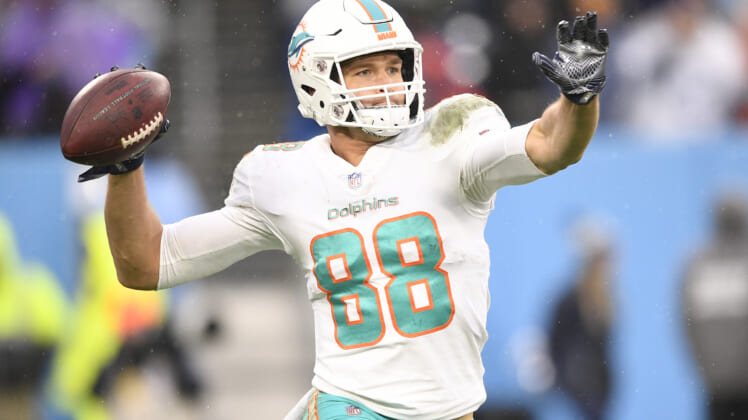 Miami Dolphins tight end Mike Gesicki is one of the best NFL players and the organization knows it. While he will be an important part of the offense in 2022, though, it seems Gesicki’s future in Miami is in some doubt.

On the verge of hitting NFL free agency, Miami placed the franchise tag on one of their top offensive weapons. While it provided Gesicki with $10.9 million guaranteed at signing, it also prevented him from hitting the open market.

Players typically don’t respond well to being franchise tagged by their club. It’s only a one-year contract, but the organization’s decision to keep them out of a free agency goes against the player’s best interests. As a result, it can influence any attempts to negotiate a long-term deal.

According to Mike Garafolo of NFL Network, Gesicki and the Dolphins haven’t “really engaged in contract negotiations,” this summer. Barring a dramatic change in circumstances, the 6-foot-6 tight end won’t be signing a long-term deal with Miami by the July 15 deadline.

The lone good news for Miami is this won’t be an issue that carries into the 2022 season. Gesicki already signed the franchise tender and is committed to playing this season. Beyond that, though, his future with the club is uncertain.

Miami invested heavily in Tyreek Hill, trading a first-round pick for him and then making him one of the highest paid NFL players. Before long, wide receiver Jaylen Waddle will also be seeking the first contract extension in his NFL career.

Gesicki, a second-round pick in the 2018 NFL Draft, has already played on a below-market value contract. The 26-year-old wants to get paid and if the Dolphins aren’t willing to do it, he’ll find multiple teams willing to offer $14-plus million per year next spring.