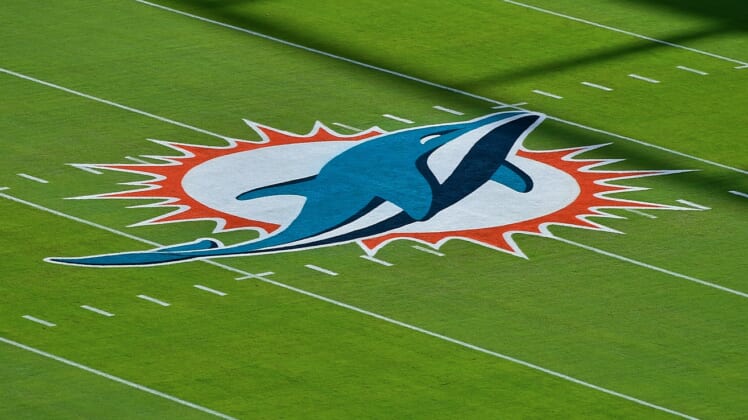 Sep 20, 2020; Miami Gardens, Florida, USA; A general view of the Miami Dolphins logo painted on the field at Hard Rock Stadium prior to the game between the Miami Dolphins and the Buffalo Bills. Mandatory Credit: Jasen Vinlove-USA TODAY Sports

With just days remaining until the NFL Draft clock starts, Miami is taking calls on its top first-round pick. Meanwhile, the team’s positional priority with its later Round 1 selection might be changing.

Related: 3 trade options for the Miami Dolphins in the 2021 NFL Draft

According to Pro Football Network’s Tony Pauline, the Dolphins are moving away from Najee Harris at No. 18 overall and turning their attention to drafting an edge rusher.

Harris would be a fantastic addition for Miami’s backfield. He would reunite with Tua Tagovailoa, a close friend, and help turn this into a more balanced offense. But with teams becoming increasingly wary of investing a first-round pick into a running back, it’s not a big surprise that the front office could go in another direction.

Miami would certainly love it if Michigan edge rusher Kwity Paye, the 18th-ranked player on our draft board, was available. But he might be on the New York Giants’ radar and could be targeted by a few other clubs. If he is gone, Azeez Ojulari and Jaelan Phillips stand out as intriguing options at No. 18.

Assuming Miami waits to address running back until Day 2, a few candidates stand out.

Day 2 running back targets for Dolphins

Thanks to the Pittsburgh Steelers, Harris likely won’t make it out of Round 1. So, the Dolphins will need to look elsewhere for a featured running back.

Sitting at No. 36 overall, there’s a chance Travis Etienne is available. He’s the best home-run threat in the 2021 NFL Draft class and his pass-catching skills are flying under the radar. While he profiles as an exciting back at the next level, he might not be Miami’s preferred target.

North Carolina star Javonte Williams is the running back to keep in mind. While he’s a bit of a one-year wonder risk, that also means fewer concerns about tread on the tires. AT 5-foot-10, Williams boasts incredible elusiveness, runs with a physicality that is tough to find and he is incredible at maintaining balance after contact.

NFL Draft analyst Matt Fitzgerald compares him to an enhanced version of Las Vegas Raiders star Josh Jacobs. Having a running back like that would be a huge boost for Miami’s offense.

If Miami wants to wait a little longer, there will be committee running backs it could target. Williams’ teammate, Michael Carter, plays much bigger than his size (5-foot-8) and there is plenty of explosiveness in his game. Just as important, he is one of the better receiving backs in this class.