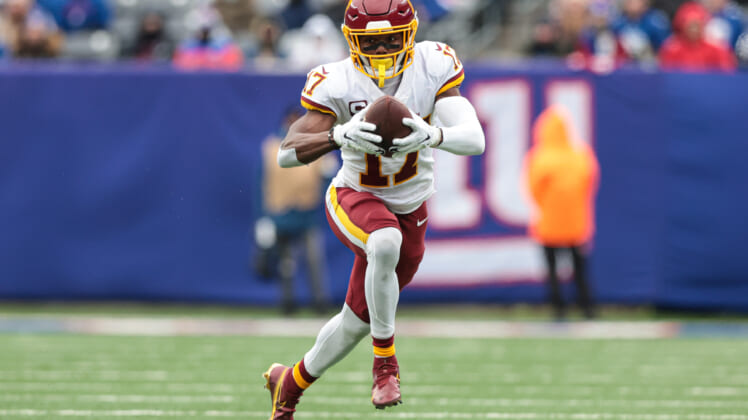 The Washington Commanders entered the offseason with plenty of uncertainty at the wide receiver position, with Terry McLaurin set to enter the final year of his rookie deal. Once the first round of the 2022 NFL Draft concluded, that anxiety eased a bit with the selection of Penn State’s Jahan Dotson as the 16th pick on Day 1.

Good, because with McLaurin and the Commanders agreeing to a three-year extension worth up to $71 million, it appears he won’t be headed anywhere, anytime soon. This essentially locks in McLaurin and Dotson both through the 2025 season, giving Wentz a strong foundation to work from.

When thinking of the top receiving corps in football, no one will mention the Washington Commanders right? You have others like the Cincinnati Bengals, Tampa Bay Buccaneers, and several others that would be mentioned before the Commanders come up. But is that fair?

For now, yes. The Commanders have no business ranking in the top-five, with Dotson, McLaurin and Curtis Samuel leading the way.

Then again, with Dotson on board, the sky’s the limit. We don’t know his full potential yet, and while the chances of him being a bust are just as equal as his chances of becoming a contributor, the skill set Dotson does have, is exciting.

Scary Terry is one of the best, fastest deep-threats in the NFL. Dotson brings a few similar traits, with his excellent route-running, ability to create separation, and high-point a ball in traffic. If he and Wentz can build chemistry early on, there’s no reason why he can’t be the starter opposite of McLaurin.

Meanwhile, Samuel only was able to play five games last season, but the year prior, he racked up 851 receiving yards catching passes from Teddy Bridgewater. Put McLaurin outside, with Dotson on the opposite side, with Samuel mixing in, and suddenly the Commanders have a formidable group of receivers.

That’s without even mentioning Logan Thomas to this point, who flashed consistency in 2020, racking up 670 yards and six touchdown catches as well.

At the end of the day, the Commanders aren’t likely to rival the very best receiving corps in football, but with the addition of Dotson, they should be able to field a potent group of skill position players at all times, which is a big improvement over last season’s group.