Max Strus had a career-high night against the Charlotte Hornets with 19 points on five made triples. Could the Heat have another undrafted diamond in the rough? 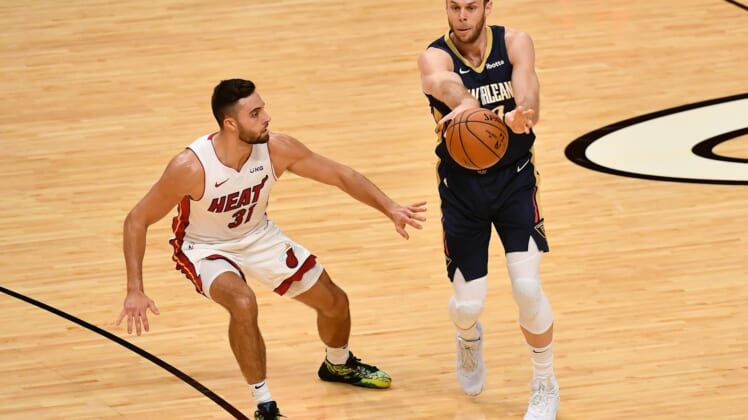 Max Strus has taken a similar path that Miami Heat guard Kendrick Nunn took when he was released from the Warriors’ G-League team in 2019. Nunn was looking for an NBA deal after the Warriors were unable to temporarily place him on the roster. The Heat recognized Nunn’s talent and signed him a day before the regular season ended.

While it is not exactly the same scenario for Strus, the Heat acquired him after the Chicago Bulls decided to not bring him back for the 2020-21 season. Miami may have benefited again at the expense of another franchise that is struggling.

Strus has never been a hot commodity throughout his basketball career, but when the Heat see a player they think can be good, they will pounce on the opportunity.

Max Strus began his collegiate career at Lewis University, which is a Division 2 school in the Great Lakes Valley Conference. Strus spent two years with Lewis University with his best season coming in his sophomore year. He averaged 20.2 points, 8.4 rebounds, and 3.5 assists before announcing he would leave the school to play in Division 1.

Strus transferred to DePaul University for his final two years of eligibility. He sat out one year due to NCAA transfer rules and started the next season a redshirt junior. He had a very productive season while averaging 16.8 points, 5.6 rebounds, and 2.7 assists, and made the second-most 3-pointers (81) in school history.

The former small-school prospect declared for the 2018 NBA Draft, but returned to school for his senior season instead. Strus had his best year, posting average lines of 20.1 points, 5.9 rebounds, and 2.2 assists. His best performance was in a victory over St. John’s University where he scored a career-high 36 points in the second half. Strus then entered the 2019 NBA Draft as a senior and went undrafted.

What led to Max Strus landing with the Miami Heat?

It took a series of unfortunate events for Max Strus to land with the Miami Heat. However, it may be the best possible path he could have taken for his career. Strus was signed as an undrafted free agent by the Boston Celtics before the start of summer league. He played well enough during that stint to earn a two-way contract with the team.

The Celtics then signed Strus to a standard NBA contract before the season began. Unfortunately, he was cut because Boston decided to keep Javonte Green over him instead. Strus signed a two-way contract with the Bulls shortly thereafter and split the season between the Bulls and their G-League affiliate.

Strus played well when he was in the G-League, with 18.2 points, 5.8 rebounds, and 3.2 assists per contest in 13 games. Unfortunately, bad luck struck again when Strus suffered a torn left ACL in a G-League game on December 21, 2019. He was declared out for the season and wasn’t brought back by the Bulls for the 2020-21 season.

After successfully rehabbing his left knee, Strus signed with the Heat on November 30, 2020. The Heat loved Strus coming out of college and looked for ways to acquire the former DePaul University standout.

Max Strus’ play during the preseason for the Miami Heat

Max Strus struggled out of the gate in the Miami Heat’s first preseason game against the New Orleans Pelicans. The 24-year-old air-balled a few shots from beyond the arc and struggled to perform in the first half. However, he stepped up his game in the second half and totaled 11 points, eight rebounds, and four assists in that strong finish.

Strus was competing with Heat forward B.J. Johnson to secure the final two-way contract from Miami. He played more minutes than Johnson in the first game and had the inside track on securing his spot. This was even more apparent after Strus scored 22 points on 8-of-11 shooting from the floor in Friday’s game against the Toronto Raptors.

Johnson only played garbage time minutes at the end of the night, so it was apparent that Strus was most likely favored to score the new deal. It was then announced the next day that Max Strus would be the Heat’s second two-way contract alongside returning guard Gabe Vincent.

Max Strus’ season has been unexpected

Max Strus has been a pleasant surprise for the Miami Heat this season. Strus is averaging 6.7 points, 1.3 rebounds, and 0.5 assists on 49.1% shooting from the field in 11 games. Strus’ last game showed that he can be a rotational player for the Heat when he scored a career-high 19 points on five made three-pointers.

Head coach Erik Spoelstra seems to trust the two-way guard from DePaul as he played him almost the entirety of the fourth quarter against the Sacramento Kings in a winning effort. Strus’ defense has been good this season and that combined with his ability to shoot has made it nice to play him during stretches.

Strus could have a role in the rotation moving forward, considering most of Miami’s roster is back and he still played in place for Duncan Robinson when he committed two fouls in the first quarter. That could be an inconvenience for Robinson since he will be entering free agency this offseason.

Strus should be a part of the rotation moving forward this season, which could be even more important after the trade deadline.

What can Max Strus bring to the Miami Heat long-term?

As one of the most prolific three-point scorers in DePaul’s history, Strus is able to catch fire from outside at any time. There have been instances in Heat practices where Strus took over the floor, just like he did in Monday night’s game.

One of Strus’ underrated abilities is his ability to rebound. Wherever Strus played in college, he averaged at least five rebounds and showed the ability to hold his own. His game is comparable to his teammate Duncan Robinson. Another overachieving player who began his college career in Division 3, Robinson worked his way to having one of the best shooting seasons of all-time in the NBA.

Strus is a knockdown shooter who can give a similar type of performance that Robinson gives. While the Miami newcomer isn’t quite as proficient as Robinson is at least right now, everyone saw what the Heat’s development staff did to help Robinson. Even the most reasonable expectations suggest Strus has greater upside to explore.

As a result, he could play a big role with the Heat in the future if Miami pulls the trigger on a potential Victor Oladipo deal. In a prospective trade, Robinson would almost certainly be included in the Heat’s package because of his possible new contract entering this offseason.

In any event, Miami should be able to place its trust in Max Strus’ future whether a trade for Oladipo or another player comes or not. The Heat have a knack for finding undrafted players that can contribute early and on a nightly basis, and although Strus’ journey to South Beach has been arduous, featuring multiple cameo roles on NBA teams and a torn ACL, he’s landed with a franchise as good as any in the modern NBA at furthering player development.

Strus has the talent to make it as a great shooter in the NBA. His off-the-ball movement and ability to spot up and shoot are going to be key things for him moving forward. There are a few things that Strus will have to work on such as his passing and defense, but he should have time to improve in these two areas.

We could look at this moment next year and think the same thing we thought about Robinson. How did Miami find another diamond in the rough and turn him into a solid role player? Max Strus earned his two-way contract with Heat, and over time, should prove that every team that passed on him made a mistake.