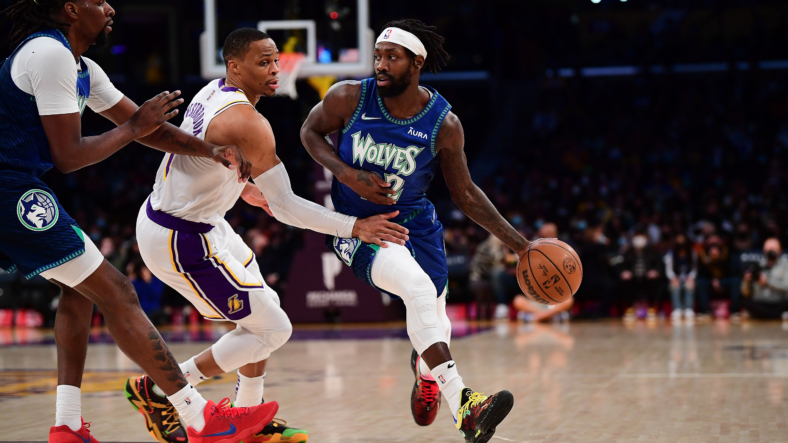 The 2022 NBA offseason has had its fair share of surprises that didn’t involve the Los Angeles Lakers. From the blockbuster trade of three-time Defensive Player of the Year winner Rudy Gobert to the drama that Kevin Durant started with the Brooklyn Nets, fans were witness to circus of events over the past several months.

Interestingly, one transaction that caught everyone by surprise was when the Los Angeles Lakers traded for Patrick Beverley. It’s still a fact that Russell Westbrook is a Laker and the addition of his on-court rival was a head-scratcher. The interaction between the two seemed professional. During Beverley’s introductory press conference, the two guards were seen greeting each other without any animosity. Westbrook even gave his new teammate a towel to help him wipe off his sweat after the workout.

After that, everything was peaceful. But, after Germany lost to Spain for a chance at a gold medal during the FIBA EuroBasket 2022, the Lakers made an astounding move. Los Angeles decided to sign the unrestricted free agent guard Dennis Schroder. It was a good signing for the team since Schoder just capped off FIBA tournament where he finished fifth in scoring. I wish they did it before trading for Pat Bev, but that’s just me.

Now, the Lakers have three guards capable of leading and running Darvin Ham’s offense. The front office has formed a three-headed monster that could cause rotation issues for the team. If we include the other guards on their roster, who we haven’t mentioned, they could potentially have five point guards fighting for minutes.

Let’s look at the cases for a starting spot among these three Lakers guards.

Out of the three capable guards, Russell Westbrook has the most experience in leading a team. Although he did have a terrible 2021-22 NBA season, it’s not all his fault. His numbers were down last season, but that’s what you get for playing alongside a ball-dominant superstar in LeBron James.

Even with his struggles, he put up a decent eight-game stretch during the latter days of November until the beginning of December (23.5 PPG, 6.9 RPG, 8.9 APG). Also, out of the Lakers’ “Big Three,” the former MVP was always available. In the 82-game season, Westbrook was able to play 78 outings. His durablity and availability for the team shouldn’t be overlooked.

Yes, Westbrook wasn’t at his best last season. But you can’t incorporate a player in a different system and expect him to figure things out immediately. The nine-time All-Star already had his first taste of what it’s like to play alongside James and Anthony Davis. It also looks like he’s been addressing his issues during the offseason.

The Los Angeles Lakers trading for Patrick Beverley was quite a shock to almost everyone following the NBA. If you are an avid fan of the Association, then you know there’s bad blood between Westbrook and Beverley. Thankfully, it looked like they’ve gone past that and were seen smiling and laughing together.

The 10-year veteran earned his stripes early in his NBA career and became a starter in his sophomore season. Since then, he’s started most of the time for the teams that he’s been on. Out of the three, Pat Bev might be the one that could potentially stand out. His defensive prowess might work out well in Ham’s system. Also, the 6-foot-1 guard can play better defense than Westbrook and Schroder.

In an era where three-and-D players are valued, Beverley has the better case at starting for Los Angeles. Being a 38% shooter from the three-point area, the three-time All-Defensive can help open the floor for James and Davis to get to work. Given how he was able to help the Minnesota Timberwolves to get back to the playoffs, Beverley can do the same thing for the Lakers.

The Lakers completed their point guard trio with their recent acquisition of Dennis Schroder. Together with Westbrook, Schroder is one of two guards that have had the opportunity of playing alongside James and Davis. Also, he’s had the opportunity to play for Darvin Ham back with the Atlanta Hawks. Ham served as an assistant coach with the Hawks in 2013 when Schroder was a rookie.

During the offseason, no team expressed interest in signing the German guard. Luckily for him, the FIBA EuroBasket tournament was ongoing, and he focused his sights on winning the gold medal. It helped his quest finding a team. His 22.1 points per game average helped him lead the Germans for a third-place finish in the FIBA tournament.

Schroder can help boost the Lakers’ offense, especially on the open floor. During his first stint with the team, Dennis the Menace started 61 games and did a decent job running as the team’s secondary facilitator. The former 17th pick’s quick style of play can open up new things on the offensive side of the floor. Los Angeles wasn’t able to win much during Schroder’s first time with the team, but it helped the team have a decent postseason run.

The Los Angeles Lakers have created a new problem as they tried to retool their roster. With a ton of backcourt options, it’s a daunting task for Ham and his coaching staff to satisfy everyone with their playing time. A possibility of playing all three guards might be risky. But, due to the new age of basketball, it won’t be surprising to see the Lakers take the risk of having all three guards on the floor at once.