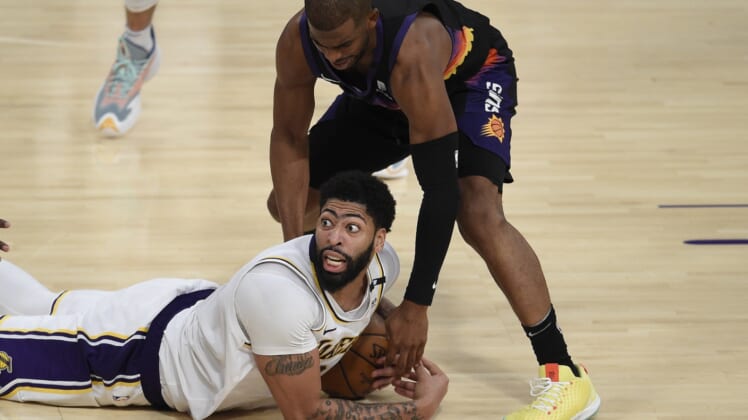 Update: According to Shams Charania of The Athletic, Anthony Davis has been listed as day-to-day with a groin strain

Los Angeles Lakers star big man Anthony Davis struggled through the first half of their Game 4 outing against the Phoenix Suns on Sunday, shooting just 2-of-9 from the field while scoring a mere six points.

Unfortunately, those are the only two quarters Davis played in a huge outing against the conference-rival Suns in Phoenix. The injury-plagued big man suffered a groin strain and did not come out on the court to open the second half. Almost immediately, Davis was ruled out for the remainder of the game.

This is just the continuation of injury woes that have impacted Anthony Davis and the defending champion Lakers. Remember, the eight-time All-Star missed 36 games during the regular season with an Achilles’ injury. Only recently has Davis looked like his former self.

In the three games heading into Sunday’s outing against Phoenix, he was averaging 27.0 points and 9.3 rebounds on 43% shooting from the field.

Los Angeles boasted a 2-1 series lead heading into Game 4. But the loss of Anthony Davis could impact the team big time moving forward.

We’ll have further updates on this injury as they become available.