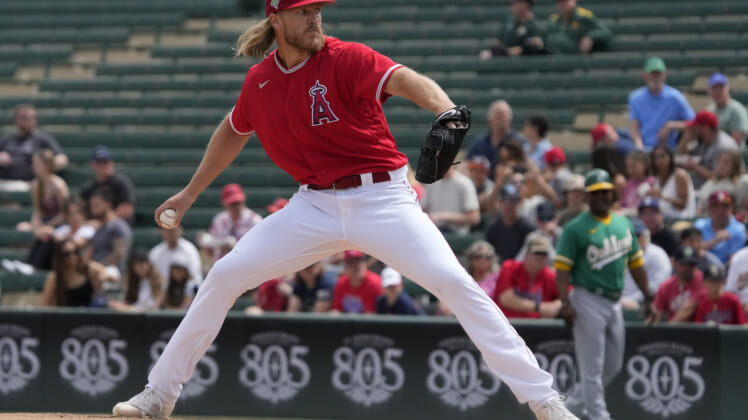 Noah Syndergaard is hoping to bring the Los Angeles Angels to the playoffs for the first time since all the way back in 2014.

The former New York Mets ace signed a one-year, $21 million deal with Los Angeles this past winter after suffering through an injury-plagued two-year span.

Having made his Spring Training debut with the Angels during a minor league game last week, Syndergaard is hoping to return to full health. He’s also hoping that his presence can help the Angels end their long postseason drought.

“I see a lot of what I saw in 2015, just the overall grit and bad-a** persona, playing with a chip on our shoulder. It’s been a while since the Angels made the playoffs. This is my first year here. The overall tone is they’re kind of all sick of this s**t.”

Tell us how you really feel, Thor.

In reality, Syndergaard’s health will be key to Los Angeles competing with the Houston Astros and Seattle Mariners in what is a revamped American League West.

As noted above, the former All-Star pitcher has dealt with major injuries over the past two seasons. That includes recovering from Tommy John Surgery. All said, Syndergaard has appeared in two games since the end of the 2019 campaign.

For an Angels team that was somewhat quiet during the winter, having another frontline starting pitcher to pair with Shohei Ohtani will prove to be key.

Los Angeles has struggled big time from the bump throughout pretty much its entire playoff drought. Flush with the likes of Ohtani, MIke Trout, Jared Walsh, Anthony Rendon and youngster Jo Adell in a potent lineup, any type of plus-level starting pitching will be key.

As for what Syndergaard might be able to bring to the Los Angeles Angels, he’s set to have a discussion with manager Joe Maddon about any workload limitations here soon.

The 29-year-old hurler made his Spring Training debut with the Los Angeles Angels in a minor league game last week, throwing 50 pitches (34 for strikes).

“I hardly got any sleep last night,” Syndergaard said about his debut. “My nerves were flowing all throughout this morning. Just good getting my feet wet and getting out there and facing some competition.”