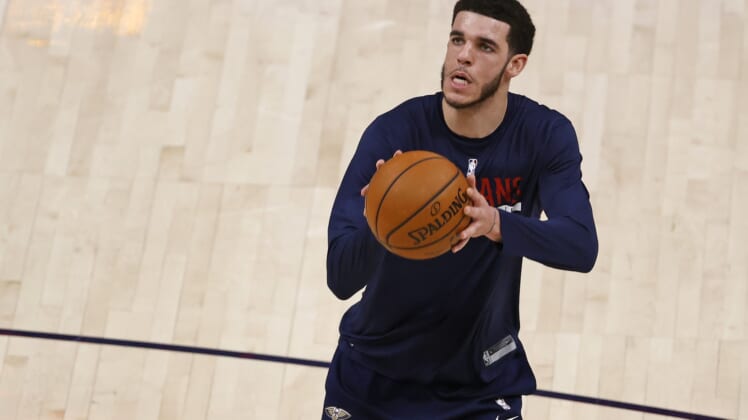 The New Orleans Pelicans opted not to trade star guard Lonzo Ball ahead of the in-season deadline on March 25. It was somewhat surprising given his status as an impending restricted free agent and a questionable long-term fit in New Orleans.

Ball, 23, is in the midst of a career season. The former No. 2 pick of the Los Angeles Lakers is averaging 14.2 points, 4.1 rebounds and 5.6 assists on 38% shooting from distance. It led to widespread interest in the young man’s services ahead of the NBA trade deadline.

With New Orleans battling for a spot in the play-in tournament, we’re now hearing some more rumors suggesting that Lonzo Ball could be a part of a sign-and-trade this coming summer.

“Some executives came away from those talks (ahead of the deadline) with the belief that Ball might be available in a sign-and-trade in the offseason as a restricted free agent,” Brian Windhorst of ESPN noted recently.

Sign-and-trades have been the name of the game in recent offseasons. Teams knowing full well that they are going to lose a player in free agency. In turn, they attempt to get something in return.

As a pending restricted free agent, New Orleans has the right to match any offer for Ball. This puts the team in a pretty strong situation to pull off a sign-and-trade.

Given his reported market of $20 million annually, that’s magnified further. Below, we look at three likely trade scenarios.

Returning to his Southern California roots might make sense for Ball after the Lakers made him the No. 2 overall pick back in 2017. It’s also a tremendous fit given that Los Angeles had to pull off a trade for the aging Rajon Rondo ahead of the March 25 deadline due to its issues at point guard.

Teaming Ball up with Paul George and Kawhi Leonard would give the Clippers a foundational three moving forward. As for the Pelicans, the idea here would be to get proven players to build around behind Zion Williamson and Brandon Ingram. In a potential sign-and-trade, the Pelicans net Marcus Morris, Terance Mann and two second-round picks for Ball.

NBA rumors point in the direction of New York making a play for Ball this summer. The team views stud rookie Immanuel Quickley as more of a two-guard and was in on acquiring Lonzo ahead of the March 25 trade deadline.

This would get a tad more complicated in the summer with New York having cap room to sign other top-end free agents outright. Perhaps, the Knicks make a play for Kyle Lowry or Mike Conley. If not, offering up someone like young center Mitchell Robinson and the Mavericks’ first-round pick in 2021 could entice New Orleans.

Lonzo Ball to the Chicago Bulls

By acquiring Nikola Vucevic in a blockbuster deal at the NBA trade deadline, the Bulls have made it clear they want to go all in with their current core. That includes fellow All-Star Zach LaVine and stud rookie forward Patrick Williams.

While former lottery pick Coby White has played well, he’s seen more as a traditional two-guard. Adding Ball to the mix with White, LaVine and Vucevic would make this a darn good team. From New Orleans’ perspective, adding someone like veteran Thaddeus Young and multiple second-round picks for Lonzo Ball might make sense.