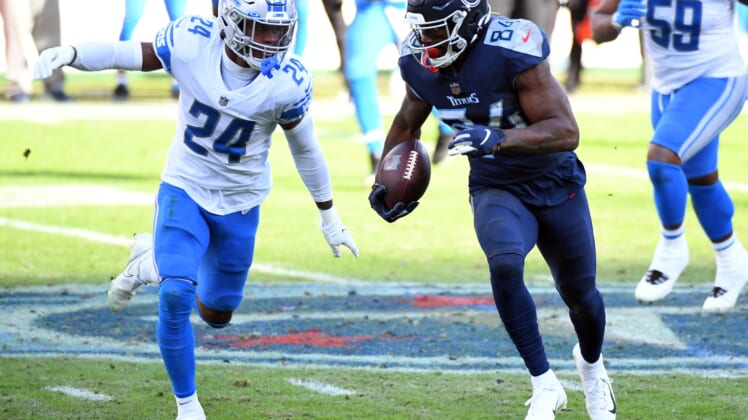 The Las Vegas Raiders free agent targets this NFL offseason will focus primarily on the defensive side of the ball. It’s a major need after this unit gave up nearly 30 points per game in 2020.

Pass rush is an obvious need for Jon Gruden and Co. Meanwhile, the Raiders would absolutely love to find a true centerfielder at free safety. Offensively, wide receiver should be a target after Las Vegas moved on from free agent bust Tyrell Williams.

Below, we give you five Raiders free agent targets for the 2021 NFL offseason.

It appears that the Raiders are going to move off current starting right tackle Trent Brown ahead of NFL free agency. For good reason. Whether via trade or release, Las Vegas would save a cool $14 million against the cap. Brown, 27, played just five games this past season due to a combination of injuries and COVID-related drama. He does not fit in to the Raiders’ future.

Instead, Jon Gruden and Co. find a still-young 23-year-old Robinson to replace him. The former Alabama standout can play both sides of the offensive line, potentially creating competition with former first-round pick Kolton Miller to be Derek Carr’s blindside protector. He’s played at a Pro Bowl level the past two seasons and would come in cheaper from a 2021 NFL salary cap perspective than Brown, even if it means $15-plus million annually on a long-term deal. This almost makes too much sense.

Raiders general manager Mike Mayock has gone on record indicating that he’s relying on their young defensive backfield to step up. Las Vegas is relying on a combination of youngsters to hold down the fort, including starting strong safety Johnathan Abram. Even if the former first-round pick morphs into a star, Las Vegas is in need of a true centerfielder from the free safety position.

With the Las Vegas Raiders set to move off veteran defensive back LaMarcus Joyner ($8.7 million cap savings), this becomes an even more pressing need. That’s where the 24-year-old Williams comes into play. He’s a true ball-hawk, having recorded 13 interceptions in four career seasons. The former Utah standout also yielded a sub 70 passer rating when targeted in 2020. This would be an ideal free-agent acquisition for the Raiders.

New Raiders defensive coordinator Gus Bradley runs a specific scheme that values bulk at defensive tackle. It’s one of the reasons an impressive Johnathan Hankins might not be back in Las Vegas next season. They want more run-stuffing ability from this position.

Certainly, the Raiders would be acquiring that in the 318-pound Tomlinson. They’d also be getting a two-way defensive tackle who can put pressure on the quarterback (10 QB hits in 2020). As with the other potential Las Vegas Raiders free agent targets, the idea here would be to add someone for the future. At 27 years old, Tomlinson would not be merely a short-term option.

Henry Ruggs struggled with inconsistency and injuries after the Raiders made him a top-12 pick in the 2020 NFL Draft. Free agent bust Tyrell Williams is gone after failing to play a single game for Las Vegas. Heck, slot man Hunter Renfrow is the Raiders’ top returning wide receiver under contract for next season.

While Vegas will go hard on defense during NFL free agency, I fully expect the team to target a top-end receiver. The class is absolutely loaded at this position. Still only 26, the 6-foot-3 Davis would make perfect sense for Las Vegas. He’s coming off a near 1,000-yard season with the Tennessee Titans and is now starting to live up to the expectations that came with being a top-five pick back in 2017. Davis and Ruggs would be a nice duo for Derek Carr moving forward.

This is the elephant in the room. Jon Gruden has made it clear. Since trading Khalil Mack back in 2018, the Raiders have struggled to find a consistent pass rush. In fact, the Raiders recorded just 21 sacks a season ago en route to yielding nearly 30 points per game. This is going to be a major target of Las Vegas during the NFL free agent period.

What better way to address the issue than adding Ngakoue to the mix? He started ascending to super stardom when Bradley was the Jaguars’ head coach and defensive coordinator as a rookie back in 2016. There’s a built-in relationship here. Ngakoue is a perfect fit in Bradley’s scheme and Vegas has the cash to spend top money. Of all the Las Vegas Raiders free agent targets, this Pro Bowler makes the most sense.