Executives around the NBA are reportedly happy that the Brooklyn Nets and Kevin Durant were able to work out their differences because it seems that many of them were hesitant to sell the house to acquire a man building a track record as a player that can burn your house down.

On Tuesday, the basketball world was once again caught off guard when the Nets and Durant revealed that they had met on Monday and resolved the issues between them. The one-time league MVP no longer wanted to be traded and all involved would continue their “partnership” and work toward bringing Brooklyn a championship in 2022-2023.

While the news was surprising, since Durant had reportedly doubled-down on his desire to be moved after giving Nets owner Joe Tsai an ultimatum to trade him or fire the organization’s head coach Steve Nash, and general manager Sean Marks, it wasn’t completely stunning. The trade market for Durant had little traction as few teams came anywhere close to the historic asking price the Nets had for, arguably, the NBA’s best player.

While many assumed the lack of progress was due to Brooklyn’s unrealistic asking price, it seems that hesitation from rival teams also played into the fluidity in the Durant trade market.

On Wednesday, USA Today NBA writer Jeff Zillgitt reported that “executives and owners are relieved the Nets did not capitulate to Durant’s wishes. He just signed the extension that kicks in this season one year ago, and they wanted Durant to honor at least one year of the deal.” However, the two-time NBA Finals MVP’s trade request has also added to a reputation around the league that he will look for ways out after a year or two as he continues to chase championships. That possibility, Zillgitt says, made some organizations uncomfortable when it came to giving up years of first-round draft picks in a possible deal for Durant. 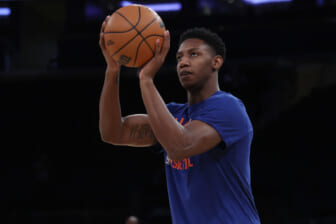 The Nets likely came to this realization long ago and it is probably why rumblings began at the end of July that the organization hoped they would be able to convince Durant to return next season. In the end, the Nets got what they wanted and did not have to take a subpar offer to transition from championship contender to being back in a rebuild.