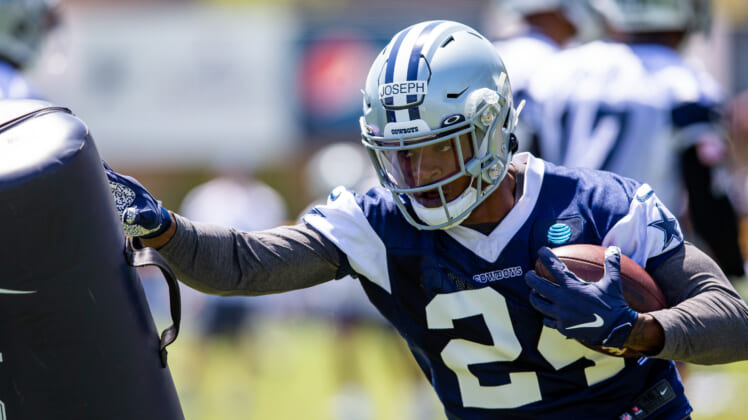 Dallas Cowboys cornerback Kelvin Joseph is being sought by the Dallas Police Department as a “person of interest” in connection with a deadly shooting last month in Dallas.

Fox 4 News in Dallas released security footage earlier this week from near the scene of the shooting with the videos provided by homicide investigators. In the footage, a group of men enter the nightclub and later shows them getting into an interaction outside. One of the men involved in the altercations seemed to be wearing a YKDV necklace and Joseph is also known by the rap name “YKDV Bossman Fat.”

The shooting resulted in the death of 20-year-old Cameron Ray following an interaction with the group on March 18. Ray and his friends were walking to their cars when a dark-colored SUV pulled up and opened fire.

“All of a sudden, you see that black suspect vehicle riding up the street. Shots are fired from that vehicle towards Cameron and his friends.”

Dallas police confirmed to Patrik Walker of CBS Sports that Joseph matched the description of one of the men in the video and they were seeking to interview him to obtain more information. Dallas police detective Tonya McDaniel also told Fox that the group identified inside the nightclub was the same one involved in the altercation outside later that night.

As of Friday morning at 7 AM EST, the Cowboys have not released a statement regarding the investigation. However, per ESPN’s Todd Archer, the team is encouraging Joseph to cooperate with law enforcement. Additionally, per Walker, the Cowboys don’t believe Joseph was the gunman.

Joseph, a 6-foot-1 cornerback, was the 44th overall pick in the 2021 NFL Draft. The 22-year-old was expected to play a larger role on the team’s defense in the upcoming NFL season.

A Louisiana native, Kelvin Joseph was a 247 Sports’ four-star recruit in the 2018 recruiting class. He committed to LSU, playing in 11 games as a true freshman. LSU suspended him for the 2019 Fiesta Bowl due to a violation of team rules.

Joseph entered the transfer portal following his suspension. In July 2019, he announced he was transferring to the University of Kentucky. In his lone season with the Wildcats, Joseph recorded four interceptions and snagged a pick-six across nine games.

NFL.com noted before the 2021 NFL Draft that teams had some off-field concerns with Joseph, primarily tied to his suspension and departure from LSU. The combination of talent, size and upside convinced Dallas to draft him with the 44th overall pick, ahead of cornerback Asante Samuel Jr., linebacker Jeremiah Owusu-Koramoah and All-Rookie center Creed Humphrey.

Joseph played 164 defensive snaps in his rookie season, per Pro Football Focus. Dallas also used him on special teams, deploying him as a return man and using him on punt and kickoff coverage.