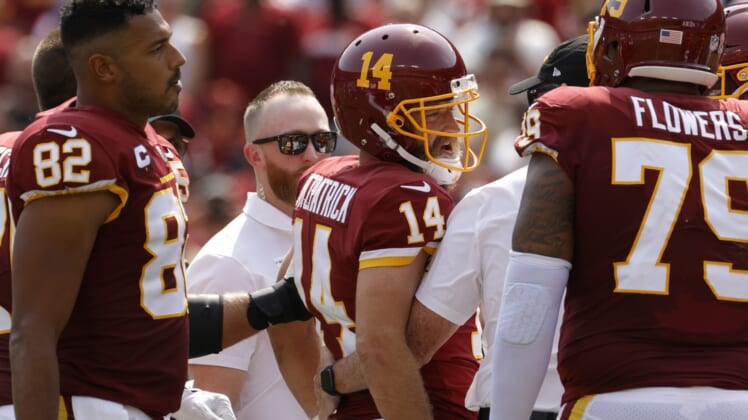 Making his first start in a season opener on Sunday, Justin Herbert picked up where he left off last year for the Los Angeles Chargers.

The second-year pro completed 31 of 47 passes for 337 yards and a touchdown pass, leading Los Angeles to a 20-16 victory against the host Washington Football Team in Landover, Md.

Herbert did throw a costly interception near the end zone with his team driving in the second quarter, picked off by William Jackson III.

But L.A.’s defense had Herbert’s back on the next play. Kyzir White forced Washington running back Antonio Gibson to fumble at his own 3-yard line, which Chargers linebacker Keith Murray Jr. recovered.

Three plays later, Herbert hit Williams for a 3-yard touchdown, giving L.A. the lead for good, 20-16 with 11:21 left in the contest. The Chargers salted the game away on the final drive, running out the clock and giving Brandon Staley his first NFL victory in his head coaching debut.

Gibson rushed 20 times for 90 yards to lead Washington, which lost starting quarterback Ryan Fitzpatrick to a right hip injury in the first half.

The 38-year-old signal caller had to leave the game midway through the second quarter when he was hit by L.A. edge rusher Uchenna Nwosu while trying to throw the football into the flat.

Fitzpatrick got up limping on the play and had to go back down to the turf, where he was attended to by the team’s training staff. He appeared to move OK on the sideline afterward but gave way to backup quarterback Taylor Heinicke.

Fitzpatrick completed 3 of 6 passes for 13 yards, with no touchdowns and no interceptions before the injury.

The Chargers also lost a key player to injury in safety Nasir Adderley (shoulder). Alohi Gilman replaced Adderley, who did not return.

Down 10-6 when he entered the game, Heinicke rallied Washington.

He led his team on an eight-play, 81-yard scoring drive to start the second half, capped by an 11-yard touchdown to Logan Thomas. The score gave Washington a 16-13 advantage, its first lead of the game with 11:20 left in the third quarter.

However, Dustin Hopkins missed a 51-yard field goal wide left that would have extended Washington’s lead early in the fourth quarter, allowing Herbert to engineer the winning drive later in the fourth.