Justin Fields was ‘pissed’ about Bears’ gameplan in his first start 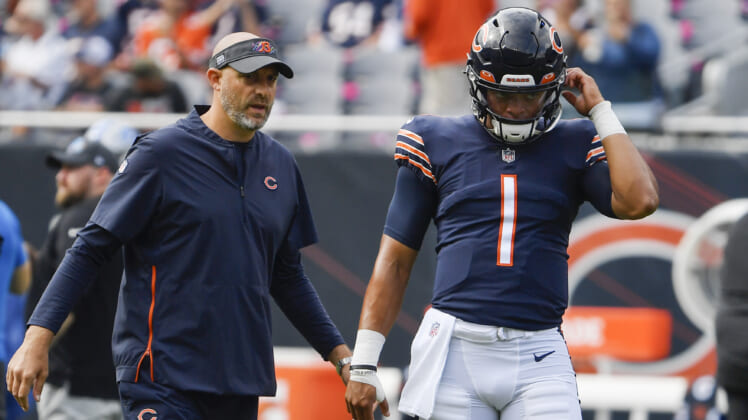 In Week 3 of the 2021 NFL season, Justin Fields got a chance to make his rookie starting debut with the Chicago Bears. It wasn’t a strong debut.

The 11th pick in the draft, Fields completed 6-of-20 passes for just 68 yards, taking nine sacks while only having three rush attempts for 12 yards. Even at the time, Matt Nagy received criticism for his gameplan. Now we have a report suggesting Fields didn’t appreciate how the Bears set him up either.

According to Ron Veal, who has reportedly been the quarterback coach for Fields dating back to sixth grade, the gameplan Nagy and Co. put together for the former Buckeye’s first NFL start had the QB upset, in a big way. Veal got on 670 The Score in Chicago to tell his side of the story.

“It was bad,” Veal said. “He took a beating that day. It was kind of crazy and weird at the same time. . . . I know he was a little pissed about it but I didn’t get an explanation. And I really didn’t ask because I know he was in a situation where he was really pissed off about it.”

We can all agree, it was an ugly debut. Fields didn’t have any other games such as the one he played against the Cleveland Browns, but he didn’t exactly look like a franchise QB either.

The hope is new Bears offensive coordinator Luke Getsy can put together stronger gameplans going forward, one that won’t piss off their first-round pick they’ve traded up for as Fields heads into his second year.

Better gameplans or not, the Bears need to add to their receiving corps after losing Allen Robinson to get their 23-year-old signal-caller some more weapons outside. Darnell Mooney is a solid start but expect to see new general manager Ryan Poles add a few more pass-catchers during the 2022 NFL Draft at the end of the month.