Julian Edelman plans to settle into retirement, not rush to reunite with Tom Brady and Rob Gronkowski in Tampa Bay.

Edelman retired last month from the NFL and spent his entire career with the New England Patriots, spanning 11 seasons and resulting in three Super Bowl rings and 620 career catches.

Asked by Michael Irvin on a recent podcast if he was considering connecting with good friend Brady on the Super Bowl champion Buccaneers, Edelman put his cards on the table.

“My knees breaking down, I’m not gonna sit here, you know, I got everything I wanted,” Edelman explained. “I got three rings, played in a magical dynasty, with an unbelievable franchise coach, best quarterback of all time, like, yo, I’m not a greedy guy. I played to win, I played to compete, I don’t need anything else to prove. I’m good with what I did, I left it all out on the field.”

Brady hinted that Edelman might not be retired long after he announced his decision in April. 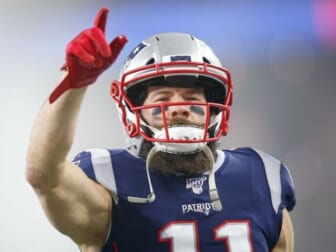 A seventh-round pick out of Kent State, the college quarterback converted to wide receiver and was also a return specialist for the Patriots earlier in his career.

His performance in the playoffs stirred recent media chatter about his Hall of Fame candidacy, and multiple players chimed in on whether they felt Edelman was worthy of a place in Canton.

Edelman said he’s perfectly content letting such debate rage on, but won’t participate in the back and forth unless it becomes a topic on “Inside the NFL” where Edelman will be part of the panel.