With eight current head coach openings around the NFL, many expected New England Patriots offensive coordinator Josh McDaniels to be a popular choice in this hiring cycle. So far, he hasn’t received an official interview, even though his season ended during Wild Card weekend.

To be fair, there are still three general manager openings after the Giants got their guy, and once those other franchises get their decision-maker on hand, McDaniels could generate more interest.

One of those teams with a GM vacancy is the Las Vegas Raiders after letting Mike Mayock go.

According to Mike Florio of Pro Football Talk, the team could be “preparing to make a run at McDaniels“.

The Raiders have already interviewed Patriots director of player personnel Dave Ziegler, who would appear to be a natural fit with McDaniels from their experience together in New England. Although, it may not be that simple. Florio also speculates that McDaniels wants full control over the operation with any gig he lands.

Which, if McDaniels truly wants full say, as Bill Belichick enjoys in New England, who knows how Ziegler fits into the puzzle. Does that make a McDaniels hire more likely or less likely? 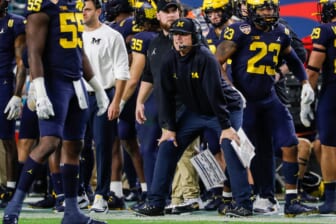 Josh McDaniels could be close to getting another chance

Some might say, Josh McDaniels already received his chance to be head coach, with the Denver Broncos, but that was over a decade ago. From 2009-10, McDaniels went 11-17, when he was just 34 years old. Now after 11 more seasons as an offensive coordinator, he appears ready to get back out there.

It’s also hard to forget when the Indianapolis Colts agreed to make McDaniels their head coach in February of 2018, before withdrawing from the position later that day. It was a very strange decision that reminded some of a young Bill Belichick in a way.

Indecisiveness aside, McDaniels is one of the more experienced offensive play-callers in the NFL and he’s worked under one of the greatest coaches of all time for 18 seasons. Plus, being on-hand for all but four of Tom Brady’s 20 seasons with the Patriots can’t hurt either.

We also were witnesses to Mac Jones leading the Pats to the playoffs in his first season under the guidance of McDaniels. His résumé might look as appealing as ever to interested teams. We’ll see if the Raiders ultimately decide Josh McDaniels is their pick.