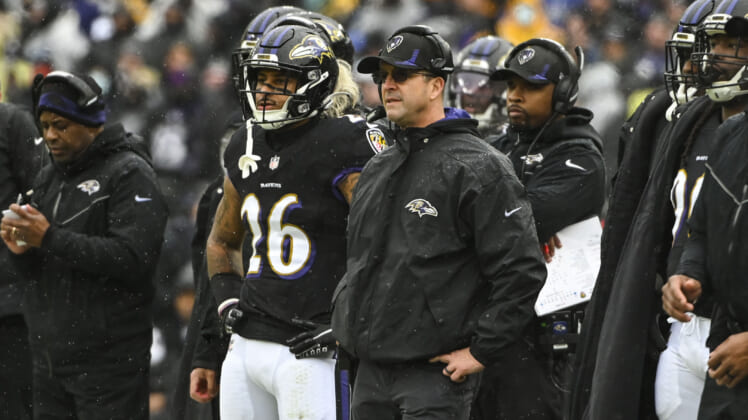 John Harbaugh has had near unprecedented success as the head coach of the Baltimore Ravens since taking over back in 2008.

Despite coming off their first non-playoff season since back in 2017, the Ravens’ organization just rewarded the Super Bowl winner for that.

According to the Ravens official website, they have signed Harbaugh to a three-year extension through the 2025 season.

Harbaugh, 59, was slated to enter the final season of his current four-year contract. It makes sense that he wouldn’t want to become a lame-duck head coach given the success the former Philadelphia Eagles special teams coordinator has had in Maryland. If this extension is fulfilled, Harbaugh will have coached 18 seasons with the Ravens.

This comes on the heels of Baltimore parting ways with defensive coordinator Don “Wink” Martindale after four seasons. The Ravens’ defense took a major step back in 2021, finishing 25th in yards allowed and 19th in scoring. This unit had finished in the top-10 in each category over the previous two seasons.

As for Harbaugh and the Ravens, they finished this past season with a 8-9 record and missed out on the playoffs altogether.

A lot of that can be contributed to injuries that happened early in the season and throughout the campaign. Losing the likes of running backs Gus Edwards and J.K. Dobbins as well as star cornerback Marcus Peters during the preseason obviously played a role here.

Among his most-notable accomplishments, Harbaugh led Baltimore to a win over the San Francisco 49ers in Super Bowl LXVII following the 2012 season. It was a game that saw the Ravens blow a 28-6 lead before coming out on top after a failed two-point conversion from the 49ers.

Since then, Baltimore has not made it as far as the AFC Championship Game. The hope here is that things turn around to an extent and this organization returns to championship contention. At least for now, the Ravens plan on Harbaugh being the guy to lead them back.