Jimmie Johnson is "open" to running in NASCAR again, according to a recent interview with The Tennessean. Who would Johnson drive for in his select starts? 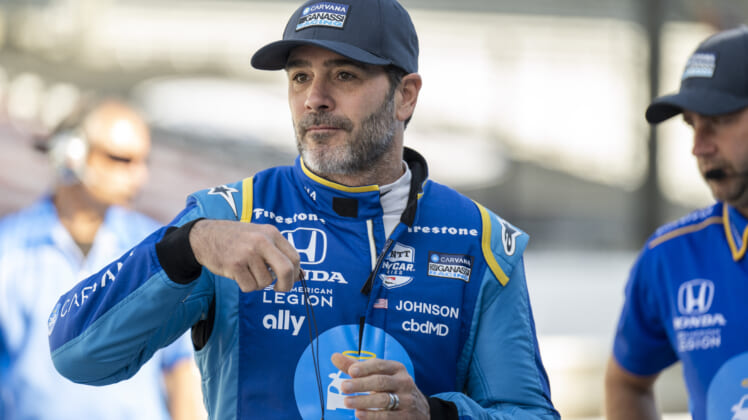 Jimmie Johnson retired from NASCAR after the 2020 season, but the 46-year-old driver made headlines after saying he’s open to returning to the sport to The Tennessean.

Let’s evaluate Johnson’s possible return to the sport where he has clinched seven championships.

Jimmie Johnson’s comments on a return to NASCAR

Jimmie Johnson talked to the The Tennessean and expressed thoughts about his racing future. It was pretty notable as Johnson has been focused on the NTT IndyCar Series.

The 46-year-old talked about the prospects of NASCAR in his future.

“I am open to (going back to NASCAR). I don’t see myself on a full-time schedule but if the right opportunity came along, you know, I love driving and I still want to drive I just don’t want that NASCAR full-time schedule.”

It certainly sounds like Johnson wouldn’t return for a full-time schedule, but the interest of NASCAR seems to still have his attention despite a completely new race car.

The Chip Ganassi Racing driver was then asked about what would be of the most interest to him with NASCAR moving forward.

“I’m open to anything; especially for some one-off stuff.”

Jimmie Johnson on his future in racing

Johnson has expressed his interest in running the Indianapolis 500 and Coca-Cola 600 on the same day, which prompted Trackhouse Racing owner Justin Marks to give his approval for Johnson in the No. 91 international car.

There has also been interest from Johnson in running the Indianapolis Motor Speedway oval track, but NASCAR currently runs the road course layout and will run it again for the 2023 season. 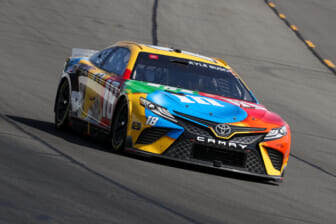 Hopefully, Johnson returns to NASCAR at some point to compete because having legends return to the sport can only have a positive impact which will be discussed below.

The impact of Jimmie Johnson possibly coming back to NASCAR

Jimmie Johnson’s possible return to NASCAR would be huge for the sport after he left at the conclusion of the 2020 season. Johnson has never closed the door but it’s exciting to think about it in the future.

Johnson has only driven for Hendrick Motorsports in his NASCAR Cup Series career, but this would need to change if he wanted to run another Cup Series race in his career.

Hendrick Motorsports currently has four full-time drivers and due to the rules NASCAR has imposed, a fifth car cannot be run by the organization, even on a part-time basis.

The easiest avenue for Johnson would be running for Trackhouse Racing in the No. 91 international car, as stated above. Justin Marks is open to allowing Johnson in the vehicle so it makes too much sense.

While it might be a disappointment to Hendrick fans who only want him to run NASCAR with the organization, seeing Johnson return in any capacity is great for the sport.

Johnson is arguably the greatest NASCAR driver of all-time and his return would certainly be the topic of conversations at any track he would race at moving forward.

Many race fans would buy tickets to see their idol race one more time and TV ratings would go through the roof as the draw for Johnson would be strong.

While Johnson might not be competitive due to his lack of experience in the NextGen car, it’s more so his presence that means the most in this scenario.

It likely wouldn’t be many races either as Johnson stated he doesn’t want to run full-time. Most of them would probably be events he really wants to run due to his schedule.

Either way, Johnson’s return to NASCAR would be big in any capacity. Everyone should hope the seven-time champion decides to give the sport a few more chances at running a race.