Will anyone ever break Jerry Rice’s NFL receiving records?

Most will say Jerry Rice is the greatest wide receiver of all-time. At times, other players have appeared like they have a chance to break some of his greatest career accomplishments, but so far none have come close.

As the career leader in receptions, receiving yards, and touchdown catches, will anyone ever break Jerry Rice’s receiving records?

Jerry Rice is the NFL’s career receptions leader with 1,549

As it stands, Larry Fitzgerald has the most receptions among active leaders. At No. 2, Fitz is just 117 receptions away from tying Rice for the lead. The issue here is that Fitzgerald has yet to sign anywhere and caught just 54 passes a season ago. If he lands somewhere, he would have to haul in 59 catches for another two seasons to catch Rice. 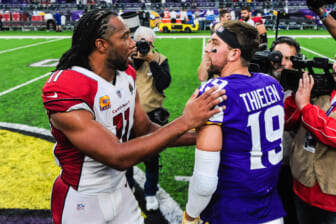 Fitz turns 38 before the season begins, but he has only missed a total of nine games in his 263-game career. Only he knows how he feels. But at this point, it seems unlikely Fitz will hang on long enough just to eclipse Rice’s receptions record. Back in 2015, even Fitz admitted he doesn’t think Rice’s receptions record is attainable.

Among the next five active leaders on NFL teams, Julio Jones and DeAndre Hopkins appear to have the best chances. Julio will be 32 this season and needs to catch 701 more passes to tie Rice. In other words, unless he can catch 100-plus passes for the next seven years, it’s not going to happen for him.

For example, to tie Rice, Julio Jones would need:

On the other hand, Hopkins is just 29 and needs 802 more receptions to tie Rice. With just over 100 catches for eight years or 80 for the next 10 seasons, Hopkins could catch up to Rice’s receptions record. At his current pace of 93 receptions per season, Hopkins would need to maintain his pace for the next nine seasons to shatter Rice’s record.

While today we marvel at Tom Brady having designs to play until he’s 45, Jerry Rice was still putting up 1,200-yard seasons when he was 40. The next oldest to have a 1,000-yard season as a wide receiver? Jerry Rice, when he was 39. Other than himself, Joey Galloway, Jimmy Smith, and Rice again all did it in their age-36 seasons. Rice was just built differently.

Oldest wide receivers to gain 1,000 receiving yards or more in a season

While Larry Fitzgerald has a slight chance to reach the all-time receptions record if he chooses to play another two seasons, Fitz is nowhere close to Rice’s yardage record despite being No. 2 on the all-time list.

Again we turn to Julio Jones as the next closest leader, but even he is nearly 10,000 yards away. He may catch up to Fitz someday, but that’s it.

To tie Rice, Hopkins would need:

We mentioned that no receiver other than Rice has topped 1,000 yards past the age of 36. For Hopkins to pass Rice, he’d have to average well north of 1,100 for the next 10 years, at which point he would be 39. Basically, Hopkins faces very long odds.

Of the top-five active touchdown catch leaders on a team, nobody comes even close to reaching Jerry Rice’s 197 career touchdown receptions. While teams are passing more now than ever before, the GOAT’s records still seem unreachable.

For rookies entering the NFL today, now that they are playing 17-game seasons, breaking some records may be slightly easier to achieve if they can play long enough. A receiver would have to average:

Looking at those numbers for an individual year may seem achievable. Receivers do that all the time in the modern era. However, to top Jerry Rice’s records, a receiver would have to average these stats or better over a 15-year span.

Most athletes enter the NFL somewhere between ages 21-24. As you saw earlier, only three receivers have ever topped 1,000 receiving yards at the age of 36 or older. Add 15 years to a 22-year-old receiver and they are already 37. How in the world did Jerry Rice do what he did?

When you consider injuries, poor quarterback play, or just the body breaking down, what Rice did in his career is incredible. For any one receiver to top these three records Rice holds right now seems impossible.

Maybe now that players have an extra game per season, some will get closer. But as it stands, it doesn’t seem like any player is currently on the path to breaking Rice’s records and for that reason, Rice remains the GOAT.