The Las Vegas Raiders have taken a methodical approach to their search for a new head coach and general manager. They relieved Mike Mayock of his duties for the latter position last week. This week, the Silver and Black will interview its first head-coaching candidate outside of the organization.

According to NFL Network’s Ian Rapoport, the Raiders will sit down with Jerod Mayo Tuesday. He’s also interviewed with the Denver Broncos, but the New England Patriots defensive assistant didn’t make their short list of candidates.

Mayo isn’t the hottest name on the Raiders’ list, though he deserves some consideration because of his work with the Patriots. Let’s dig into his resume, the positives and concerns about his candidacy.

The Patriots fielded a top-five defensive unit in points and yards allowed for the 2021 campaign. Though Mayo served as the de facto defensive coordinator, he held that position in a collaborative capacity with head coach Bill Belichick and his son, Steve, who’s the outside linebackers coach.

How does anyone assess Mayo’s influence as defensive coordinator with so many voices involved in New England’s play-calling process?

When the Raiders sit down with him, they’ll have to ask probing questions as it pertains to his job duties in New England.

Mayo has only coached for three years at the pro level. In 2019, he became the Patriots’ inside linebackers coach, earned some trust and took on an expanded role this past season.

Because of Mayo’s inexperience, one has to wonder about his ability to assemble a quality staff. He’s played in the NFL for eight years, which has allowed him to build relationships within the league, but does the young assistant have the pull to lure high-end coaches to Vegas?

As a defensive assistant, Mayo would have to present an offensive plan to owner Mark Davis, which should be a key aspect of his interview. In a division with quarterbacks Patrick Mahomes and Justin Herbert, the Raiders’ offense cannot lack creativity and must execute a lot better deep in the opponent’s territory after finishing 26th in red-zone scoring in 2021. 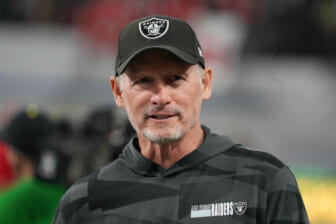 When Mayo walks into Raiders’ headquarters, he must sell his leadership skills.

As a player, Mayo became one of Belichick’s trusted captains on the field. He played in a leadership position at linebacker and performed at a high level, earning an All-Pro nod in 2010.

Following an unsettling season away from the field, the Raiders need someone to keep the ship steady—a coach who can come in right away and command the respect of the guys in the locker room. As an accomplished former player who’s earned his stripes during the Patriots’ dynasty, Mayo may fit the bill.

Despite his indistinct job responsibilities, Mayo has left his mark on the Patriots’ inside linebacker unit.

On his watch, Dont’a Hightower earned a well-deserved 2019 Pro Bowl nod, recording 5.5 sacks, 19 quarterback pressures, 71 tackles, eight for loss and four pass breakups. Ja’Whaun Bentley, a 2018 fifth-rounder, has made strides each year in the past three terms. After playing just 138 defensive snaps in his rookie campaign, he’s developed into a key starter, leading the Patriots in tackles (109) and allowing an 87.3 passer rating in coverage for the 2021 campaign.

When you look at some of the top defenses across the league, those units have exceptional playmakers at the inside linebacker spot. The San Francisco 49ers have Fred Warner, the Dallas Cowboys drafted Micah Parsons last April, the Tampa Bay Buccaneers re-signed Lavonte David for a reason and the New Orleans Saints have an All-Pro field general in Demario Davis. Mayo knows how to get the best out of the linebacker position, and that could change the complexion of the Raiders’ defense.

Mayo’s leadership within a successful organization likely appealed to the Raiders. He could finally fix the club’s underachieving linebacker group. While Denzel Perryman had a standout 2021 Pro Bowl campaign, Cory Littleton and Nick Kwiatkoski haven’t played up to their contracts. Vegas needs more out of the position with versatile linebacker Nicholas Morrow on an expiring contract. Rookie third-rounder Divine Deablo has shown potential.

On the flip side, Mayo will likely need to wait a little longer before he lands a head-coaching job. If the 35-year-old had a clear-cut role with the Patriots, he would have a stronger chance to impress during the interview process. While sharing responsibilities with the Belichicks, some may question his ability to succeed outside out of the Patriots’ coaching staff.

In 2023, Jerod Mayo may have more momentum if the Patriots end the campaign on a stronger note as opposed to a blowout loss in which his unit gives up 47 points in a playoff game. He’s a decent candidate but not a strong one right now.