Jarvis Landry may remain on the NFL free-agent market a while longer if a report on his current asking price is true.

When the Cleveland Browns traded for Dallas Cowboys wide receiver Amari Cooper earlier this month, Landry became expendable. While the team did allow him and his agent to seek out a possible trade, a deal never manifested and he was consequently released on March 14. Almost two weeks have passed and the five-time Pro Bowler is still available to the highest bidder.

It seems the reason the 29-year-old wasn’t quickly picked up by a WR needy team has have been revealed, and it all comes down to a pretty unreasonable asking price from the former Miami Dolphin.

Jarvis Landry is pricing himself out of a new NFL home

On Saturday, Mike Florio of Pro Football Talk reported that Landry had recently fired his representation Klutch Sports and was now being represented by Roosevelt Barnes and Jovan Barnes. The reason behind his switch in the folks that would help him secure a new contract came down to Klutch Sports not delivering deliver on what he feels he is worth.

“Landry, we’re told, had hoped to get a contract in the range of $20 million per year. Nearly two weeks into free agency, it won’t be easy to find that kind of money,” Florio wrote.

Before being cut by the Browns, Landry was set to make under $15 million. Only eight wide receivers in the league make $20 million or more, including his Cleveland replacement Amari Cooper (via Overthecap.com).

Landry is putting himself in a very difficult position. A contract earning $20 million per year is rare under even the best of circumstances. That is why there are only eight players at the position that have been able to get it. With two weeks having passed in free agency most teams have spent a large portion of their salary cap space. Currently, only nine teams have more than $20 million in available cap room. 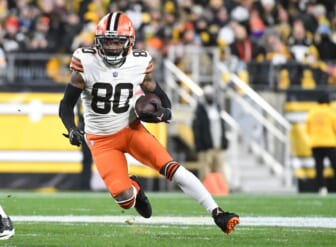 Furthermore, a player that is released going into free agency and getting a notable rise in pay is completely unheard of. And Landry is unlikely to be the exception to that unofficial NFL free agency rule.