The Jacksonville Jaguars find themselves in a peculiar position by having the NFL draft’s first selection this year, and there being no consensus top pick.

In a draft class where there’s no generational player that you must absolutely take first overall, there are plenty of routes that Jaguars general manager Trent Baalke can take. He could draft an Aidan Hutchinson or Evan Neal and no one would likely be upset. Or better yet, he could trade down and still land an impact player.

As recently as Tuesday at the NFL Combine, Baalke made it clear that he’s not against moving on from the first overall pick. Speaking to reporters, Baalke stated, “now whether we’ll be able to move it or not (is the question), but we’re very comfortable taking the pick as well.”

Baalke is right, in a sense, that all of the conjecture and hearsay in the world won’t translate into the Jaguars’ making a trade. However, there are some teams that would benefit from such a move. Let’s take a look at some possible trade scenarios.

The Panthers need to address the lack of protection that Sam Darnold received last year, so surrounding him with a competent offensive line is a good start. Drafting Neal with the top pick would go a long way toward alleviating the 35 sacks that Darnold endured in 2021. 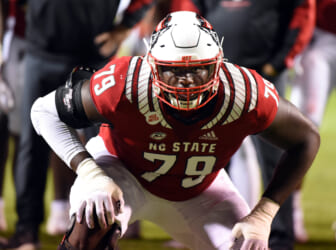 As for the Jaguars, they would acquire the sixth overall pick and a fourth-rounder for the first choice, along with some draft capital for 2023, including a second-round pick. This scenario would work out well for both sides, as Baalke could continue stockpiling picks and the Panthers could help out Darnold with this year’s prized tackle prospect.

Denver has been looking for a quarterback for what appears to be an eternity. Save for Peyton Manning’s Super Bowl run, the Broncos haven’t had much luck with drafting signal-callers. This year, John Elway and Co. could look to Malik Willis or Sam Howell for answers.

Knowing that the Broncos are desperate for a quarterback, Baalke could trade down to the ninth overall pick and also land a second and a third-rounder.

With the ninth pick, Baalke and the Jaguars could acquire Ohio State’s Garrett Wilson or Iowa’s Tyler Linderbaum. It’s a win-win. Either Trevor Lawrence gets a wide receiver or he gets a center that’s been dubbed a generational talent.

Jaguars trade back to get Detroit Lions two first round picks

While many expect the Jaguars to go with Neal with the first pick, the consensus then shifts to the Detroit Lions, who are expected to go with Aidan Hutchinson. However, it’s possible that the Lions might not want to risk it. What if Baalke considers going with Hutchinson instead, putting a fork in Detroit’s plans?

In a plausible scenario where the Jaguars and the Lions swap the first two picks, Baalke could see a package involving the Lions’ 32nd pick as well as their second-round pick. That would be quite the haul for essentially taking Neal and allowing the Lions to pick up their heralded pass rusher.

Hutchinson accumulated 16.5 sacks in his last season at Michigan and is projected to be one of the first five players off the board. However, Detroit might not want to take a chance and would instead prefer to secure Hutchinson’s services. 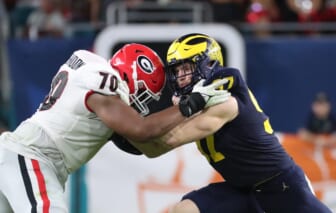