The Indianapolis Colts have a major quarterback problem heading into next season but don’t expect them to address that issue by swinging a trade for nine-year veteran Derek Carr.

For five straight seasons, the Colts have kicked off their year with a different starting quarterback. After Andrew Luck shockingly retired from the sport in 2019, the organization has been trying to find an answer to its most important position to no avail.

Last year, the flavor of the season was 2016 second-overall pick Carson Wentz. However, it only took a year for the Indianapolis Colts’ decision-makers to tire of Wentz’s inconsistency. Before this season, they made the bold choice of bringing in well-aged four-time Pro Bowler Matt Ryan.

Well, that didn’t work either as the 37-year-old was benched twice during a dumpster fire of a 2022-2023 season. Despite needing to address the position again in the offseason, a team insider claims they won’t do so by swinging a deal for a certain proven QB that is on the trade market.

Several notable quarterbacks could be up for grabs in NFL free agency in the offseason. However, Las Vegas Raiders signal-caller Derek Carr is actually up for grabs now after the team benched him before Week 17 and decided to bring his nine-year run with the organization to a close.

Yet, despite the three-time Pro Bowler being available, The Athletic’s Colts beat writer Zak Keefer boldly proclaimed on Wednesday, “Since some are still asking, no, the Colts are not trading for Derek Carr.” 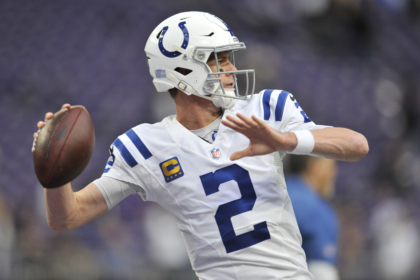 Carr will turn 32 in March and is still in the prime of his career. He is also unlikely to come at a high cost since the Raiders need to move him before Feb. 15 or be locked into a $40 million contract for the QB next season.

However, the Colts choosing to pass on another veteran to fill the QB spot long-term is the right move. The organization tried to stay competitive after Luck left but with a strong QB class in the 2023 NFL Draft, the time is now for the team to try and find a franchise signal-caller from the amateur ranks.