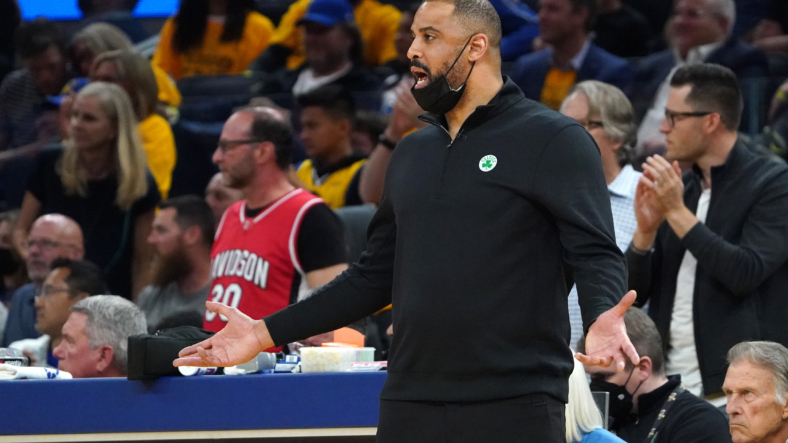 It’s now official. The Boston Celtics have announced that head coach Ime Udoka has been suspended for the entire 2022-23 NBA season for violating team policies.

“The Boston Celtics announced today that the team has suspended head coach Ime Udoka for the 2022-23 season for violations of team policies. A decision about his future with with the Celtics beyond this season will be made at a later date. The suspension takes effect immediately.”

It was reported on Wednesday that Udoka wa facing discipline, including a lengthy suspension, for violating Celtics team rules. Earlier on Thursday, ESPN’s Adrian Wojnarowski reported that said suspension would be for the entire 2022-23 season. That’s now official.

“I want to apologize to our players, fans, the entire Celtics organization, and my family for letting them down. I am sorry for putting the team in this difficult position, and I accept the team’s decision. Out of respect for everyone involved, I will have no further comment.”

Statement from Ime Udoka on suspension

It’s now clear that Udoka is not denying the allegations that he had an affair with a female staff member within the Celtics’ organization.

It’s also clear that he’s not going to seek an appeal of the suspension or attempt to litigate the matter further. Earlier on Thursday, reports indicated that Udoka has no intention of resigning. Udoka has been romantically involved with actress Nia Long since back in 2010. The two are engaged and have a couple children together. That’s the personal backdrop to all of this.

Reports following Udoka’s suspension being made official indicated that 34-year-old assistant Joe Mazzulla will take over as the Celtics’ head coach on an interim basis. With only three seasons as an assistant at the NBA level, that’s a lot of pressure given Boston was two wins away from winning the NBA title a season ago.

Boston is expected to be among the top title contenders in the NBA with about a month to go before the start of the regular season. Being without a coach who led the organization to the Finals in his first season can’t be seen as a small thing.

As for Udoka’s future in Boston, the Celtics’ statement makes it clear that this is firmly up in the air. A lot will depend on what happens behind the scenes.