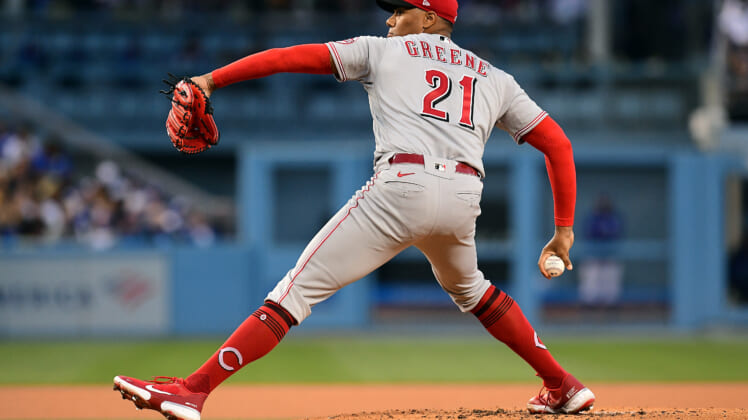 There’s a reason why the Cincinnati Reds selected Hunter Greene second overall in 2017 straight out of high school. We’ll cut right to the chase, it’s his 102-mph fastball.

Tommy John surgery in 2018 delayed his development and the complications from the COVID-19 pandemic further slowed down the fireball thrower. But after 106 strong innings in the minor leagues in 2021, Greene was able to crack the big-league roster, starting the 2022 season with the Reds.

Making his MLB debut at the age of 22, Greene took on the defending World Series champions. Spinning five innings against the Atlanta Braves, the hard-tossing righty struck out seven batters in the first start of his professional career in the bigs, allowing three earned runs as he got the win.

He then followed up a solid performance by going up against the Los Angeles Dodgers, where he tossed 5.1 innings, allowing two runs and striking out six more opponents.

On the surface, sure it’s just another young buck making their highly anticipated debut, so what right? Not exactly. What the box scores can’t tell you is that Greene’s fastball is furiously filthy. And it’s not like he simply touched 100 or 101 on the radar gun a few times, he routinely stretched the speed limit, far past the norm.

Hunter Greene’s pitch arsenal is disgusting (in a good way)

So much so that Greene set the MLB record for having the most pitches over 100 mph in a single game, with 39 fireballs thrown. Keep in mind, Greene only threw a total of 80 pitches in that start, meaning 48% percent of his pitches thrown topped 100 mph. Sure, that’s a ton of fastballs, but if they can’t hit it, or even see it, why not.

It left both Freddie Freeman and Matt Olson confused, causing them to strike out, but these are just a few of the Major League hitters who will struggle to catch up to the raw velocity Greene is in control of.

Not only does his fastball present problems, but when combined with his slider, batters don’t stand a chance.

I can’t stop watching that. Imagine standing in the batter’s box staring down the barrel trying to determine whether this little white pill is going to blow past you at speeds excess of 100 mph or if you need to quickly react to some sudden late movement. It’s a tough situation for anyone, no wonder why he only needed 179 innings pitched in the minors to reach the pros.

Basically, keep your eye on Hunter Greene over the next few years. Chances are, you won’t need a reminder because he’ll be a constant staple running through highlight reels.