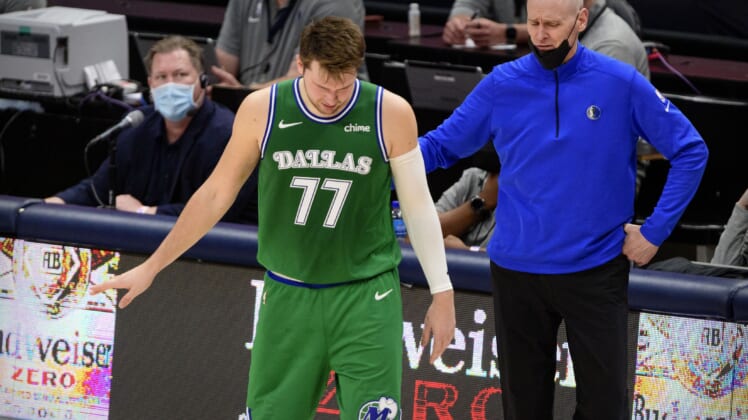 After another moment of Luka Doncic magic, the Dallas Mavericks defeated the Memphis Grizzlies 114-113. Dallas currently holds the No. 3 spot out West, just a half-game back of the Portland Trail Blazers. If the Mavs want to get out of the play in tourney — they clearly do –– Dallas must improve its offense in the clutch.

While the Mavericks went 43-22 last season, it came with a troubling 17-24 in clutch games. A 39% win rate in clutc games isn’t going to cut it for a team hoping to compete for an NBA title. This season isn’t much better, with the Mavs going 11-12 in clutch games and ranking 20th in winning percentage in those situations.

With the Mavericks ‘rough start, Dallas cannot afford to lose this many clutch games. Here are three ways Rick Carlise can fix their late-game woes.

Mavericks must get more creative on offense

Doncic has blown past every expectation scouts and analysts had for him when he entered the NBA. His transcendent ability has single-handedly elevated Dallas from a basement dweller to a dark horse contender. Too often, though, Dallas relies entirely on his transcendent talent.

Doncic is leading the league in usage at 35.0%, substantially ahead of superstars like Stephen Curry, Giannis Antetokounmpo, and Damian Lillard. Even more telling, the Slovenian possesses the ball more than any other player at 9.1 minutes per game. The Mavs’ offense is designed for Doncic to have the ball and make plays.

Doncic’s ball-dominant style works until crunch time. Dallas turns to a five-out offense and sets screens for Doncic, hoping he gets a favorable matchup. Every team knows Doncic will have the ball and all five players collapse on him. With his teammates struggling from beyond the arc, opposing teams often contain Dallas in the fourth quarter.

Adding JJ Redick helps the Mavs, but Carlisle needs to find non-Doncic ways to get good shots. He should make use of Kristaps Porzingis’ offensive versatility. The Latvian can post up at the free-throw line, creating space for other players and himself. Jalen Brunson and even Trey Burke should be incorporated into the offense, so Doncic can play more off-ball. Even a few tweaks would help the Mavericks’ stagnant offense.

Rick Carlise is a legendary coach and the memories of the 2011 championship run are still fresh in fans’ minds. Besides Gregg Popovich, Carlisle might be among the safest coaches in terms of job security. Even so, the third longest-tenured NBA coach is not without his fair share of problems.

The Dallas coach runs the most rigid rotation in the league. Opposing teams can guess the Mavericks closing lineup before a game almost without fail. The lack of rotation and lineup flexibility often means the best players on a particular night don’t play in the closing minutes.

Dallas wins and loses depending on how well they’re shooting. Some nights Brunson, Dorian Finney-Smith, and Maxi Kleber are hot, but some nights they aren’t. However, Dallas almost always finishes with Doncic, Brunson, Finney-Smith, Kleber, and Porzingis. On nights when Tim Hardaway Jr. leads the team in points, Carlisle still doesn’t adjust his rotation. Looking at how the standard closing lineup has fared, Carlisle should have a more fluid approach to the Mavs minutes.

Dallas must limit its three-point shooting

Dallas averages the fifth-most three-point attempts in the league. While that might be seen as a positive in an increasingly three-point friendly NBA, the Mavs also rank 17th in shooting from beyond the arc.. Other than Kleber, most Mavs haven’t been reliable when firing from deep. These three-point shots become even easier to defend in the fourth. Opposing defenses focus on Doncic, daring the other players to shoot. The best fix is to get players easier shots.

Brunson, Burke, and Josh Richardson are capable penetrators, who can finish at the basket. Porzingis can post up at any part of the court and create a mismatch. Doncic has added an impressive mid-range game to his offensive arsenal. Even shooters like Hardaway Jr. and Kleber can score at the rim. However, they’re all mostly used around the perimeter. It’s a lazy offense that becomes easy to defend.

If the Mavericks can solve their clutch issues, they’d be one of the most feared teams heading into the playoffs. With a coach as smart as Rick Carlise and a player as talented as Luka Doncic, don’t bet against Dallas figuring it out.