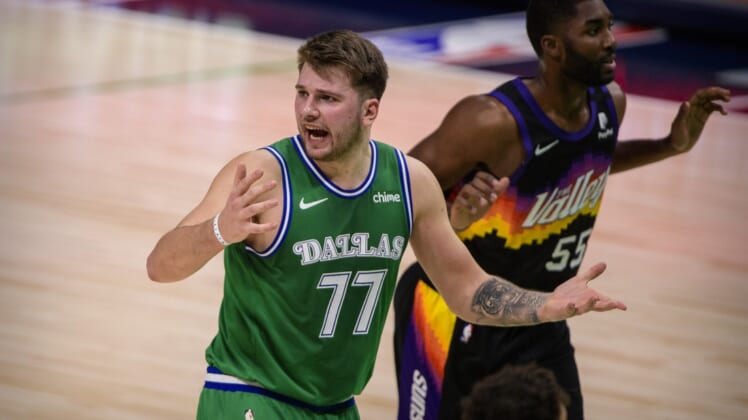 After finishing the 2019-20 regular season as the most efficient offense in NBA history, the Dallas Mavericks have shown a surprising lack of firepower this season. With a mediocre record of 8-12, the Mavericks need to quickly improve their offense.

Many teams have fallen victim to the NBA’s health and safety protocols for COVID-19, but few have been hit as hard as the Dallas Mavericks. Five players have missed time due to the protocols with four contracting the virus and missing more than two weeks of team activities. With Kristaps Porzingis’ off-season surgery recovery stretching into the start of the season, the Mavericks have yet to play a game with their best starting five.

Last week against the Utah Jazz, Dallas had almost all of their players available — Maxi Kleber is still under the league’s mandated protocols — and the lack of cohesion was obvious. The Jazz decimated the Mavericks, 116-104, but the final score could have been much worse if not for stellar play from Luka Doncic and a few short-lived runs in the third quarter.

The Mavericks are close to healthy, but, in this shortened NBA season, the team needs gel sooner rather than later.

Kristaps Porzingis needs to step up

Acquired from the New York Knicks in 2019, Porzingis is the undisputed second star at Dallas. However, injuries have plagued his career, including missing the first nine games of this season after an offseason meniscus surgery. When he’s been on the floor, Porzingis has been mostly good. In the NBA bubble games, Porzingis averaged 30.5 points per game, 9.5 rebounds per game, and 1.5 blocks. If those stats lasted an entire season, Porzingis would make an All-NBA team. However, that hasn’t been the case this season.

While his field goal percentage is in line with his career averages, Porzingis has struggled from three-point territory, shooting a lousy 28.6%. For a team that relies on three pointers and a player who takes volume threes, this is catastrophic to the Mavericks’ offense. If Kristaps Porzingis can’t reliably hit three-point shots, the Dallas Mavericks will not make the playoffs.

Porzingis is still working his way back into game shape. He should be closer to his bubble stats in a few more games. If Porzingis shooting doesn’t greatly improve, however, the Mavericks must consider making the difficult decision to trade him.

Role players need to hit shots for the Dallas Mavericks

One player who doesn’t need to improve is Luka Doncic. The preseason MVP favorite has been carrying a heavy burden this season. Doncic currently has a 36% usage percentage, second highest in the league, only surpassed by Bradley Beal. And when Doncic is playing, the Mavericks boast a stellar offensive rating of 114.3, good enough for a top-five unit. However, when Doncic is on the bench, the rating drops to 102.2, the worst in the league. Everyone around Doncic needs to step up.

With Maxi Kleber and Dorian Finney-Smith missing action, Dallas has been forced to rely on James Johnson and Wes Iwundu to make three-point shots. They haven’t. Iwundu is 3-of-21 from beyond the arc, dead last in the league among players who have attempted at least 20 threes. Johnson is a little better, but is still shooting just 29%. Both players were brought in for their defense, but without major shooting improvements, they’re both almost unplayable when the team is healthy.

The Mavericks are clearly missing Seth Curry’s shooting. If players like Tim Hardaway, Jr. and Josh RIchardson can’t fill some of his role, Dallas may regret trading Curry away.

Doncic is one of the best shot creators and facilitators in the league, but Dallas lacks a true secondary creator. Richardson can fill that role, but Coach Rick Carlise has yet to use him in that capacity. Jalen Brunson and Trey Burke are nice point guards, but they’re both score-first guards. Johnson usually has to serve as the primary playmaker in the second unit and that’s just asking him to do too much. Tyrell Terry looks too raw in his limited minutes, so the Mavericks should look to acquire a second ball-handler before the trade deadline.

Any team with Luka Doncic is at worst a stealth championship contender, but the Mavericks poor start to the season is jeopardizing their playoff status. There’s still time to turn things around. If they can address these issues, Dallas will live up their preseason championship dark horse billing.