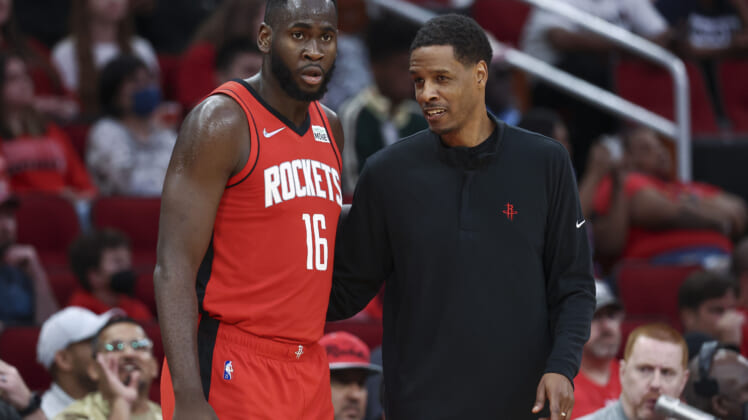 With the 2022 NBA Draft order set, the Houston Rockets have the third selection, and it seems the team’s general manager is willing to take calls for the pick.

On Tuesday night, the annual NBA Draft Lottery took place in Chicago. The Orlando Magic were the big winners for the night when they lucked out and landed the top pick in next month’s event. The Rockets weren’t as lucky.

Despite having the worst record in the NBA last season at 20-62, the franchise did not get the first pick or even the second. On June 23, the Houston Rockets will select third. Certainly not the worst place in the world to be, but definitely not what the team was hoping for heading into Tuesday night.

On the Sportsnaut 2022 NBA Mock Draft, the Rockets are expected to take talented Duke forward Paolo Banchero with their first pick. However, there is a possibility the organization isn’t satisfied with that spot and may feel a need to add more draft capital or use the pick to make a trade to improve their fortunes for next season immediately.

During a post-draft lottery digital press conference, Rockets GM Rafael Stone admitted he is not set on making the third pick next month and is very much open to conversation about trading the third pick overall.

“I’m definitely not going to block [other general managers] out. If they want to talk, I’m always available to talk,” Stone said. “I don’t listen to other people. I don’t listen to other general managers. They don’t tell me who to pick. But if it’s the case that they are interested in doing something, we’re always available to listen and if there’s something that makes sense for both teams, something will get done.”

Along with Banchero, other elite players from the college ranks like Jaden Ivey of Purdue, Ohio State’s Malaki Branham, and Bennedict Mathurin of Arizona are expected to be available at three.