New York Giants wide receiver Kenny Golladay threw a bit of shade at one of his teammates on Wednesday, when he said he believes all of them should be at the team’s current voluntary workouts.

Yesterday, 2021 first-round pick Kadarius Toney made headlines in New York when it was revealed that he would not be attending the Giants’ voluntary offseason minicamp. Obviously, the news isn’t a shocking development in a world where talented NFL athletes often pass on voluntary workouts.

However, the news was still surprising nonetheless since the team is not only trying to bounce back from a horrid 4-13 season with new head coach Brian Daboll, but Toney only played in 10 games last season. After bouts with COVID-19 and injuries to his ankle, hamstring, hand, oblique, and shoulder curtailed a great deal of his playing time in his rookie campaign.

However, Toney’s fellow wideout and five-year veteran Kenny Golladay saw things a little bit differently. The one-time Pro Bowler and 2021 big-ticket free-agent acquisition had a very disappointing first season with the New York Giants. He clearly wants to do all he can to turn things around, especially on offense, in 2022. That is why he was in attendance at the minicamp when asked by reporters, and while explaining that he threw some subtle shade at Toney and other teammates in the process. 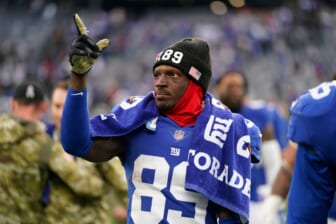 “I guess you could just say that’s how much it means to me,” Golladay said [h/t SNY]. “Especially coming off last season, I feel like the whole team is just trying to start off on a good note … I feel like everyone should definitely be here.”

It’s unclear if Golladay’s comments were a purposeful message to the 23-year-old or more coincidental. Either way, it doesn’t look good for a proven player to be at these workouts while the second-year man from Florida isn’t. However, if Toney has a bounce-back season in 2022 all of this will be quickly forgotten.