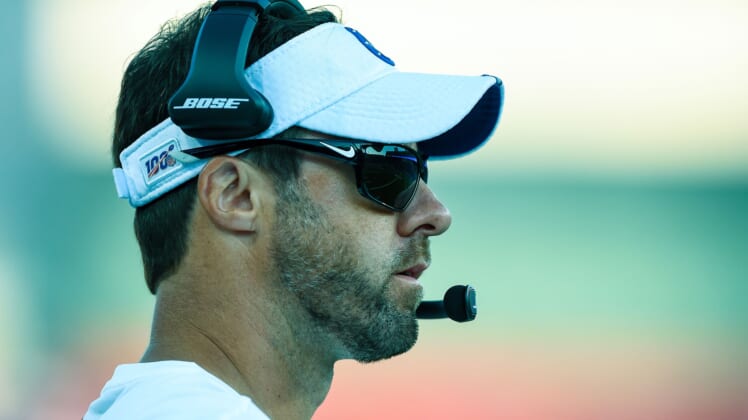 The Philadelphia Eagles have found their new head coach as of Thursday, as Indianapolis Colts offensive coordinator Nick Sirianni has landed the job, according to multiple reports.

Sirianni was in the running alongside fellow finalist Josh McDaniels, but wound up getting the nod in the end. That leaves the Houston Texans as the only remaining head coaching vacancy in the NFL.

Since Philadelphia won that aforementioned Super Bowl over the New England Patriots, the team hasn’t been quite the same. Pederson guided the Eagles back to the postseason in consecutive 9-7 campaigns before being shown the door when he logged a 4-11-1 mark in 2020.

Some might argue there’s too much of the Pederson era left over with the hiring of Sirianni. However, there’s reason to believe the 39-year-old has just what the Eagles need to get out of their recently losing ways.

Here’s where Sirianni can help out in a big way. Just an improvement on offense alone will go a long way in alleviating some of Philly’s woes in 2021, and in order for Sirianni to have accepted the Eagles’ job, he must’ve had a plan about what to do with the quarterback situation.

Sirianni definitely consulted with Reich, who worked for the Eagles from 2016 to 2017 before taking the Colts’ lead job. If Reich didn’t make it abundantly clear to Sirianni that Wentz’s career could be salvaged, why would the Indianapolis assistant take the job?

It’s almost inevitable that Wentz will be Philadelphia’s starting quarterback next season just because of the team’s salary cap problems and the fact that he’s due to be a $34.6 million cap hit.

There are just too many dots and common links to connect here. The bottom line is, Sirianni, at least in his first season at the helm, will do his best to use Reich’s system as a framework for helping Wentz bounce back. After all, it was Reich calling the plays when Wentz was an MVP candidate in 2017, as he threw for 33 touchdowns to only seven interceptions in 11 games.

Eagles fans are almost certain to bash the hire of Sirianni, but he may actually be the best candidate available given the current circumstances the franchise is dealing with. He’s an energetic, young coach who inherits a talented roster that dealt with numerous injuries this past season, and will benefit from picking sixth overall in the 2021 NFL Draft.