Donovan Mitchell could be on the move after a recent trade sending Rudy Gobert to Minnesota. Why could the Miami Heat see Mitchell as another trade option? 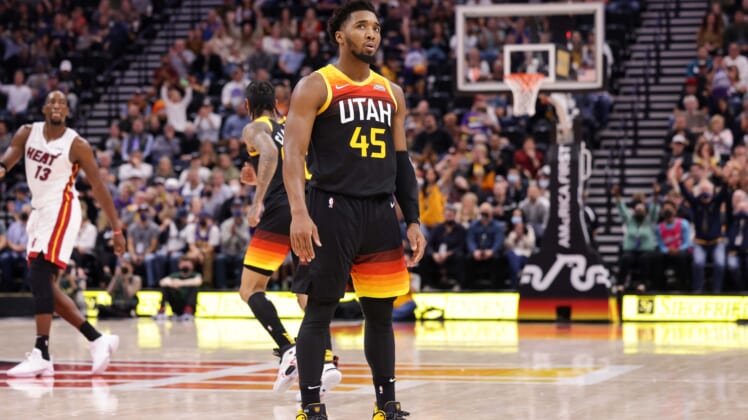 Donovan Mitchell is suddenly thrust into the equation of NBA star players possibly on the move after the Minnesota Timberwolves acquired Rudy Gobert in a massive deal.

Why is Mitchell now possibly a trade option for the Miami Heat this offseason?

Donovan Mitchell was connected to the Miami Heat before the 2017 NBA Draft even happened. However, the Heat decided to go in a different direction after he was selected one place above them.

The Heat has been listed as a prime destination for Mitchell in the event that he would ever ask out of Utah. Well, that time might be coming soon with Gobert leaving town.

While this doesn’t mean the 25-year-old is on the move, it certainly gives off the feeling that a complete rebuild could be imminent. If not, this could simply be a retool around Mitchell.

Let’s say the Jazz decide it’s time to restart the process. Most people are going to link Mitchell to Miami or New York immediately. This is where it can get tricky, but simple for the Heat.

Kevin Durant still hasn’t been traded by the Brooklyn Nets and the Miami Heat were listed as one of his preferred teams. Would they bite the bullet just to pair Mitchell with Jimmy Butler and Bam Adebayo?

Mitchell was hanging out with Butler the week before free agency opened and remains close with Adebayo. The three of them teaming up with Kyle Lowry would make sense.

Also, who has been in Mitchell’s ear for about one year? Dwyane Wade has an ownership stake in the Jazz and he is the best player to ever grace a Heat uniform. It’s all lining up for Miami if this goes the right way.

Right off the bat, it’s pretty simple to get a good package to Utah for Donovan Mitchell. If Mitchell says he wants to play in Miami, it starts to be even easier.

Tyler Herro, Duncan Robinson, Omer Yurtseven, and multiple first-round picks would likely get it done quickly. It works out for both sides and allows Miami to even keep Kyle Lowry, who might not even be intriguing for Utah.

A potential starting five of Lowry-Mitchell-Butler-(future signing/trade)-Adebayo would be absolutely lethal moving forward. It’s one that would be among the dream scenarios for the Heat.

Miami is coming off a run to the Eastern Conference finals and would obviously be willing to upgrade the roster and send out its prized NBA Sixth Man of the Year Award winner for a player of this magnitude.

Everything seems to be lining up for the Heat. Durant, Mitchell, and even Kyrie Irving could be on the move this offseason and they finally have the pieces to make a Pat Riley-type move.

It is so much to digest, but could the Knicks come up with a better offer? R.J. Barrett would be a key piece in any trade but they were also looking to acquire Dejounte Murray before he went to Atlanta.

Who says the Jazz are even willing to move Mitchell? They might just be retooling around him as DeAndre Ayton could be a possible sign-and-trade candidate.

However, it likely comes down to whether Mitchell wants to be in Utah next season. Yes, the Heat can love him all that they want, but Utah won’t give up if it has other plans.

The Gobert trade makes a Mitchell trade more likely since it shows they could be willing to rebuild. Perhaps, it could blow up in Miami’s face if Phoenix moves Ayton to Utah and the picks go to Brooklyn.

Either way, there is something brewing and it is likely coming sometime soon with the market not moving as fast as usual.